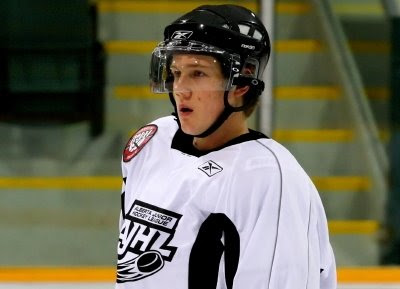 Camrose Kodiak defenceman Dylan Olsen has finally decided on which college he'll be attending next season. The 33rd ranked player for the upcoming draft according to ISS will join fellow former Kodiaks Mike Connolly and Evan Oberg at Minnesota-Duluth.

I'm a little surprised that Olsen will skate with the Bulldogs, as I thought he was headed for UND and the Fighting Sioux, but maybe the 6.02, 205 lb rearguard can get more playing time with UMD. There were also whispers that Olsen didn't have the grades to get into college and he would be heading to Medicine Hat as the Tigers hold his WHL rights. I'm glad that isn't the case here as I think young players should have as many options available to them.

Olsen suited up for Canada at the World Junior A Challenge, played in his home rink in Camrose this past November and he also strutted his stuff in the Junior A Top Prospects game this year. Olsen notched 10 goals and 29 points in 53 games this year, while racking up 123 penalty minutes. He also scored 5 power play goals.
Posted by Dean Millard @ 5:25 PM

Here's an article on Dylan fron the Duluth paper where he's called a "franchise defenseman."