Moore From The Pipeline - Part 2

The Pipeline Show is excited to bring you a series of guest player blogs by some of the top players eligible for the 2009 NHL Entry Draft. For a complete recap of the blogs so far, click on '2009 Guest Player Blogs' under 'Labels' down the right-hand side of your screen. To date we have heard from Ethan Werek, forward with the OHL's Kingston Frontenacs, and John Moore of the Kingston Chicago Steel (USHL). More will be announced shortly but first, here is the second installment of 'Moore From the Pipeline'.
----------------------- 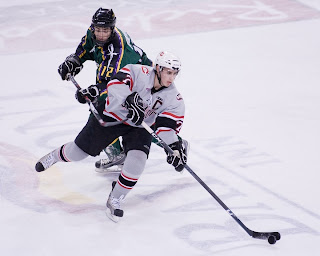 Hello, this is John Moore touching base again.

After winning eight in a row, the Steel hit a rough patch and dropped four in a row. I think that we hit rock bottom when we made the trip up to Fargo, North Dakota to play the Force. I can say without a doubt that this was the worst road trip in my two years with the Steel. Looking back at the trip, I can now laugh but it was a nightmare to say the least.

I knew from the first minute that this road trip was going to be a long one when three teammates showed up to the rink shivering, coughing, and sneezing. They had the flu but still managed to make the trip. We climbed on the bus at 9 in the morning (when it was 60 and sunny in Chicago) and got off 14 hours later in Fargo where it was snowing.

Things started off seemingly well on Friday; we had a good pre-game skate, had a solid team meal and everything seemed to be going well... until the puck dropped.

We were dominated for 60 minutes and came out on the short end of an 8-1 shellacking. We came back the next night and lost a very close game 3-1, Fargo scored an empty netter in the last minute. Immediately after the game, we boarded the bus and drove back home.

I get some heat from my teammate Andrew Miller on account that I can fall asleep pretty easily on the bus. He isn't as fortunate, as his seat is located right next to the television, which is seemingly always on.

We got back home Sunday morning, and me and my roommates, Philip Samuelsson and Alex Simonson, had a pretty low key day. We all felt pretty run down from the travel and I felt sick. After staying home sick Monday from school, I tried to give things a go on Tuesday.

My first class, Math, was just a battle. The rest of the class was taking a quiz while my teacher was explaining the material that I had missed while I was gone. In the middle of our discussion, I got the sweats. I sweated right through my shirt and my math teacher just gave me one of those "are you kidding me" kind of looks and gave me a pass to the nurse. As a senior in high school, my 12th time around the block, I really didn't feel the need to go sit in the nurses office and shoot the breeze for four hours for her to tell me I was sick, so I just walked down the street back to my house. As it turned out, I had the flu and was pretty beat down for the next couple of days.

I didn't practice Monday or Tuesday, but got back at it on Wednesday. I lost about 10 pounds while I was sick and it looked like I was carrying a piano on my back Wednesday in practice.

We dropped a tough game to Omaha on Friday. However, we were able to climb out of the hole last night with a big shootout win over the Lincoln Stars and it felt great to finally get back in the win column.

John Moore is ranked 17th overall by International Scouting Services (Feb '09) and 8th in North America by NHL Central Scouting (mid-term rankings). The 6'2 and 189 lbs defender currently has 14 goals and 37 points in 49 games this year with Chicago in the USHL. Moore has made his NCAA commitment to Colorado College while he remains an OHL free agent having never been drafted.

RuthI recently came accross your blog and have been reading along. I thought I would leave my first comment. I dont know what to say except that I have enjoyed reading. Nice blog. I will keep visiting this blog very often.

I recently came across your blog and have been reading along. I thought I would leave my first comment. I don't know what to say except that I have enjoyed reading. Nice blog. I will keep visiting this blog very often.