The down-low with Bristowe

First of all I would like to thank Dean and Guy for the opportunity to be a part of the Pipeline blog. It’s great to work with Dean again after going to broadcasting school with him. I did want to add this one tid bit of information: Even though the Raiders are in fight for a playoff spot, and won’t catch Dean’s Wheat Kings as I write my first blog... Last night the scoreboard read: RAIDERS 2 WHEAT KINGS 1. 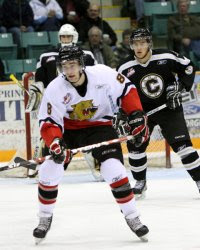 All kidding aside my first topic is about a special young player that a lot of people in the east may not have heard about, but you will. Prince George Cougar forward Brett Connolly is the best 16 year old in the league in my opinion and should be named rookie of the year in the WHL.

He may not have as many points as Jordan Weal (13 goals 49 assists for 62 points) from Regina or Everett’s 17 year old rookie Kellan Tochkin (18 goals 51 assists for 69 points). Connolly leads the Cougars in scoring with 29 goals and 27 assists for 56 points in 59 games. The PG Product will likely by named the Cougars MVP for the season and does things on many nights that you don’t see 19 year olds do in the dub.

Even Cats Head Coach Wade Klippenstein has said many times he’s been the best player on the ice for both teams. One weekend in particular comes to mind in January when the Cats faced the Kelowna Rockets with Jamie Benn, Tyler Myers in the line-up after winning gold for Canada at the world junior championship. Plus the Rockets had just received Mikael Backlund from the Calgary Flames. The 6 foot 1’,162 pound left winger’s been putting up good numbers all season despite losing line mate Dana Tyrell at Christmas time.

The Cougars have had such a tough time finding another player to go along with Connolly and centre man Marek Viedensky they tried 5 different players in one period recently. I think Connolly might even be the top WHL player selected in the 2010 NHL draft. He’s worth the price of admission and a player people should keep on their radar. He’s already on the mind of NHL scouts.

That’s the Down-low with Bristowe. Next week we’ll take a look at the WHL western conference playoff picture which should have all 8 teams decided by this weekend.
Posted by Dean Millard @ 3:00 PM