Tuukka Goes Bananas and 3 Outstanding Goalies from this weekend

The Providence Bruins lost to Bridgeport last night in a shoot out. That's not really that odd, but what happened after the shoot out was. Tuukka Rask went absolutely nuts. Not great composure for a goalie some think has a bright future with the Bruins. Watch for yourself.

I've seen some freak outs before, and had a few as well, but not really like that. I always find it funny when a guy gets so mad he falls over. For another funny freak out, check out Waterloo Head Coach P.K. O'Handley of the USHL, courtesy of The Unofficial USHL Hockey blog. 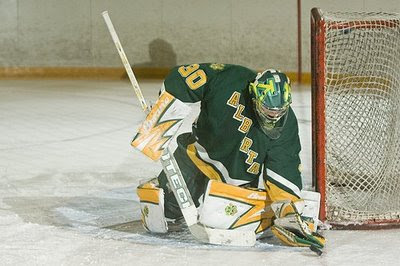 Speaking of goalies, how about these 3 guys over the weekend. Alberta Golden Bear goalie Aaron Sorochan makes 31 saves to shut out Saskatchewan 7-0 in the Canada West final. The Bears win their 2nd straight, and 7th Canada West title in 8 years. It's also their 47th total. This is Sorochan's last year with the Bears and he should get a pro contract next year. Despite the 7-0 score, the Bears last line of defence was brilliant, making big saves when the game was close to keep the dogs at bay.

Travis Rolheiser made 20 saves for the Spruce Grove Saints last night, as they clipped the Olds Grizzly's 2-1 in game 2 of the AJHL semi-final. Rolheiser was especially good in the 3rd period where the Saints were outshot 10-4. The AJHL's top team also received 33 saves from the netminder in a 4-1 win Friday night as they lead the series 2-0. 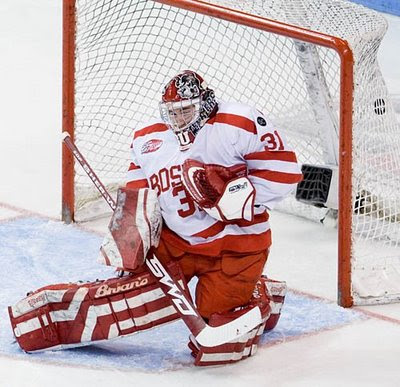 Boston University will enter the NCAA tournament as the top seed (more on that later today) thanks in large part to goaltender Kieran Millan, a past guest of TPS. The Edmonton product and former Spruce Grove Saint was named MVP of the Hockey East tournament. Millan made 32 saves as the Terriers shut out UMASS 1-0 in the clincher. He turned away 8 River Hawk power play chances as well. The Freshman was also solid in BU's opening game, making 21 saves in 3-2 victory over rival Boston College.

What do these 3 goalies have in common? They are all products of Lyle Mast's ORSPORTS. You might have heard me mention the program a few times on our show, in fact Millan himself as well as Spruce Grove assistant coach Ryan Marsh spoke glowingly about it as well. It's a system that worked for Mathieu Garon when he was with the L.A. Kings, and one that Kings goaltending coach Bill Ranford is still using. It's also one that I think could help struggling Montreal goaltender Carey Price. Watch for more on the system that's gaining steam this week on Global Edmonton Sports.
Posted by Dean Millard @ 4:17 PM

Not to condone Rask's actions, but I agree 100% that that first shootout goal should have been disallowed. Not only did he stop going forward, but he lost control of the puck in the process. I'd be pissed too.

And damn, did he ever get a good handle on that milk crate.

I would've loved to see him go off in his Finnish language.

I agree Doritogrande, on both counts!

As long as the puck is still moving towards the goal line (which it is, barely), has not crossed the goal line and has not come to a stop, the shootout attempt may continue.