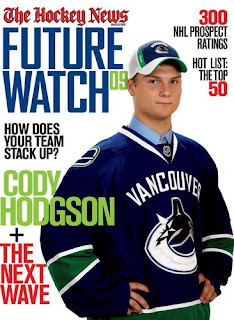 First off, whether you agree with the rankings of the prospects who are already drafted or on the lists for the 2009, 2010 or even the 2011 NHL drafts... you have to remember that these things are all done on opinion.

As a guy who has been a part of Hockey's Future since 2003, I've been a part of my fair share of prospect rankings and I can tell you first hand that they are (1)extremely difficult (2)never 100% correct and (3)completely subjective.

Try getting ten people in the same room to agree on what kind of pizza to order or which Star Wars movie was the best... it'll never be a conscensus and that's OK because everyone has their own opinion.

One thing that stood out to me about THN Future Watch this year is the goalies who did and didn't make the list. I've talked to plenty of scouts and some have told me that they have a hard time projecting goalies. In fact, that's why some teams have specific goalie scouts.

Without breaking any copyright laws here, I'm going to list the goalies who made the top 50 but not tell you exactly where they placed on the list. If you really want to know everything... go pick up your copy or better yet, get a subscription. 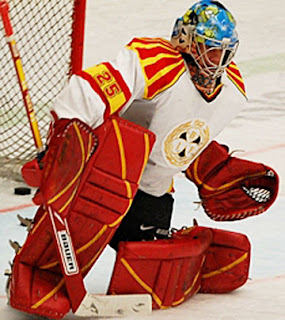 Anyway, here are the names of the goalies THN considered worthy of the Top 50 this year:

A couple guys just missed out on the top 50 but consider them as honorable mentions...

Now I'm not going to assume to know all the ins and outs for qualifying for THN Future Watch, we'll have Ryan Kennedy on The Pipeline Show this Tuesday and he can explain that. All I'm going to say is that there are some goalies in the Top 50 who I'm not sure are even the best goalie in their respective organizations. Plus some pretty good ones didn't make the grade at all either.

One of the factors to consider is the difference between the time the list was made and the time it was published. Is Jonathon Bernier still LA's top goalie prospect or was Jonathon Quick ineligible because he'd recently blown past Bernier into a NHL spot? (Personally Bernier would be higher for me anyway).

Jake Allen made the grade ahead of Ben Bishop and that one could be debated by Blues fans I'm sure.

Here are a few others names that I'm sure received recognition but for whatever reason, fell short.

Jhonas Enroth (Buffalo) - He's seeing the bulk of the action for the Portland Pirates this year and has pretty respectable numbers as a rookie in the league. Enroth has WJC experience with Sweden and was a 2nd round pick in 2006. 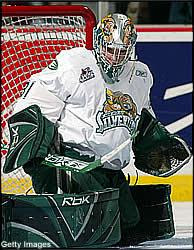 Leland Irving (Calgary) - Was he the reason Everett was so strong in the WHL or was he more a product of Kevin Constantine's uber-defensive systems? As a rookie in the AHL this year the former 1st rounder's numbers aren't as good as Enroth's but they are still OK. He might not be the slam dunk many thought he was during his draft year but I still think Irving has NHL starter potential. Irving July '07 on TPS

Matt Keetley (Calgary) - kind of the opposite to Irving as a junior, Keetley came out of nowhere and usurped a starting job in Medicine Hat and was taken in the 5th round by the Flames because few saw him enough. He's had a tough year on the farm though with an .899 save percentage and just 7 wins in 30 games. Keetley Fall '08 on TPS 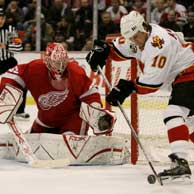 Jimmy Howard (Detroit) - He's posting the best GAA and SV% of his pro career and is in a position where the Red Wings are either going to have to play him or deal him next year. He's a former 2nd round pick (2003) and he had an excellent NCAA career at Maine.

Daniel Larsson (Detroit) - He's splitting time with Howard in Grand Rapids but the Wings 3rd round pick from 2006 is 20-9-2 so far this year. Hockey's Future ranks him as Detroit's top goalie prospect ahead of both Howard and McCollum.

John Curry (Pittsburgh) - Undrafted, Curry joined the Penguins after a stellar 4-year career at Boston University. He's currently backstopping the Wilkes-Barre Scranton Penguins in the AHL and has a 24-11-0 record with .916 sv%. He's unheralded but one to watch for. Tyson Sexsmith (San Jose) - He's been one of the best WHL goalies in each of the last 3 seasons, won a Memorial Cup as a rookie with the Vancouver Giants and was one of four players to try out for the WJC in December. There might be some of the same question around him that Leland Iriving faced - product of the system under Don Hay or not. Sexsmith on TPS

Dustin Tokarski (Tampa Bay) - Has won a Memorial Cup and a gold medal at the WJC and he's still only 19-years-old. His numbers in Spokane are even better than they were last year despite a poorer record for the team. Team Canada chose him over two goalies that did make THN's top 50 list. Tokarski May '08 on TPS 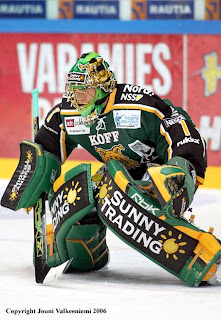 Riku Helenius (Tampa Bay) - Only 14 starts for Norfolk this year but his .932 sv% and 2.27 GAA suggest he's got the pro potential everyone believed he did during his draft year. The big Finn was taken 15th overall in 2006 ahead of Irving, Neuvirth, Enroth, Steve Mason and Larsson.

Braden Holtby (Washington) - Has been outstanding this season with the Saskatoon Blades and should see his stock sky rocket no matter what happens in the playoffs. He has a 40-14-3 record and has help take a team that pre-season polls described as a non-playoff club and has backstopped them to a 2nd place finish in the Eastern Conference. Holtby on TPS

Michal Neuvirth (Washington) - Excellent OHL goalie (aside from the Memorial Cup debacle with Plymouth) that has bounced around the ECHL, AHL and even the NHL this year. He's got the ability to play at the top level and THN ranks him ahead of Holtby on the Caps page.
Posted by Guy Flaming @ 3:04 PM

You always did a good job on the HF Top 20, Guy. I miss your rankings.

A question: how would you personally describe Dubnyk as a prospect at this point in his development? Future starter? Fringe NHLer?

Not a trick question, I'm having a hard time figuring out what he is now.

Pretty average. I think he could still be a NHL guy, his numbers aren't great but his team has sucked this year eh? Tough to read how much of their failure falls at his feet. You're the uber-stats guy so you could tell me better in that department.

I like his intangibles though - attitude is good, dedication is strong, size is ridiculous. I think he can make it but he's not in my top 25 goalie list.

I don't get see him enough to know for sure.

BTW: I'd still have Petry ahead of Nash!