Ever notice that when a new coach joins a organization, often times his former players will begin showing up as well? Mike Keenan has been around a lot and has played on a lot of different teams and it seemed to me like everywhere he went, Brian Noonan and Stephane Matteau were soon to follow. From Chicago to New York, St. Louis to Vancouver... sometimes players and coaches just have a certain chemistry and it makes sense.

Look at Brian Burke and Brad May; Vancouver, Anaheim and now Toronto.

Anyway, I was thinking about players that the Oilers could acquire next year to help out on the farm that would be (a) inexpensive and (b) familiar with the coach and that obviously leads to alum from the University of Alberta.

I hear what some of you are saying... "Um... CIS sucks, if those guys were any good they'd be playing in the AHL or something already."

I'm not going to try and change your mind on the quality of CIS hockey, you either believe it's crap or you see it as another developmental league that is no worse than on par with the ECHL (and quite possibly better than that). In my mind there are a number of solid players that come out of CIS, and the Golden Bears program specifically which is almost 100% comprised of former WHL grads. Many of those players are of the 'late bloomer' category that had they gone the NCAA route and graduated as 22-year-olds would have benefited. The CBA allows NHL clubs to hold the rights of their NCAA prospects until after graduation which obviously is a huge plus for players who need extra time to develop or recover from early career inuries. 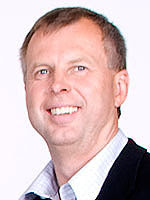 I'm going to throw some names at you but keep in mind that two things would have to be taken in to consideration of which I don't know the answer to at the present time. The first is the contract status of the players I'm about to mention and the second is that I am assuming Rob Daum is the coach in Springfield next year. So assuming Daum is behind the bench and these players are all available, here's a few guys I think could have success in the AHL under the watch of their former CIS coach.

I'll start with Ben Thomson who had a 5-year career in Medicine Hat with the Tigers during which he had a trio of +70-point seasons and scored 31, 32 and 40 goals. Thomson played just three years for Alberta before turning pro but at the CIS school he was a standout scoring 43 points in 36 games as a rookie and following it up with 53 points in 44 games and then 54 points in 43 games in his final year. 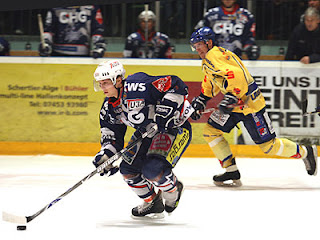 It was in the National Final game at Rexall Place in 2005 where Thomson scored two remarkable goals. With his club trailing by a goal when Thomson would tie the game with a goal that former NHL GM Craig Button described to me by saying "That was a NHL caliber goal". Solidifying his mythic status in CIS lore, Thomson would then go on to score the O.T. winner giving the home team the National Title.

Thomson stuck around for one more year, won another Championship, then bolted for the AHL where he would play under one Rob Daum in Houston. Thomson appeared in 47 games and recorded 22 points, a pace for 38 points in a full 82-game AHL season. By comparison that pace would put him easily in the top 5 scorers in Springfield this year and keep in mind that was his rookie campaign.

Currently, Thomson is in Germany playing for Ravensburg Tower Stars in the 2nd Bundesliga, a step down from the DEL (German Elite League). As you would expect a player of any quality to do in such a league, Thomson is piling up the points. Last year he recorded 50 points in 35 games and so far this season he has 40 points in 27 games.

The pros are obvious; an offensive player that has been able to translate his WHL success to the pro level. The only con I can perceive is Thomson's size. At 5'7 and 180 lbs he's obviously not a big guy. However, if current Medicine Hat Tiger Tyler Ennis has a NHL future and other pint sized players like Justin Azevedo are proving they can play in today's North American pro game I think it's worth exploring Thomson as an option.

Next on my list is defenceman Harlan Anderson who actually had a brief stint with the Falcons last year. Anderson was an offensive minded blueliner in Moose Jaw and continued in that mold for 5 years at the UofA. 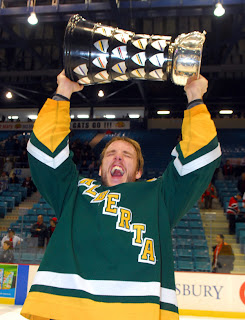 When he joined Springfield last year it looked like a perfect fit; an offensive puck-moving defenceman for a team that had none and couldn't get out of their own end. Unfortunately the former Bear struggled under Kelly Buchberger and played sparingly during his 9 AHL games.

On one occasion Anderson attempted to make a play up the ice and was criticized for his efforts when he returned to the bench. According to the person who told me about the incident, the coach snapped and practically mocked the former Bear for trying to 'play a CIS style game in the AHL'. The always consistent WHL and CIS scorer failed to register a single point during his short Springfield stint.

Subsequently Anderson looked to Europe this year and like Thomson, landed in the 2nd Bundesliga but with the Heilbronn Falcons. Not suprisingly, in Germany he has once again shown his ability to produce and has 26 points in 43 games.

Anderson was the go-to guy on the power play for the Moose Jaw Warriors and the Alberta Golden Bears. His smooth skating and accurate passing at those levels are what NHL teams covet at the top and evidently the player is still capable of being an effective offensive player. Anderson will be 27 next October and will have 6 years experience playing against men.

Another player worth considering is Dylan Stanley who I believe, but could be wrong, was recruited to the UofA by Daum before he left for the AHL. Stanley's first of three years as a Golden Bear was under coach Eric Thurston who assumed Daum's spot. Stanley had 93 points in his third WHL season with the Tri-City Americans and scored 34 goals in back-to-back years as well. 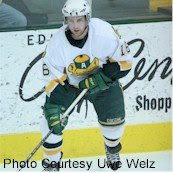 Stanley tore up Canada West as a UofA rookie when he totalled 24 goals and had a team high 58 points in 44 games. He helped the Bears win another National Title that year and captured another with Alberta last season before turning pro.

There appears to be a pipeline between the UofA and Germany and Stanley followed it, landing with the Rosenheim Star Bulls in the Oberliga. That league is another step down from the one Thomson and Anderson are in and as such, you would expect Stanley to be able to put up some decent numbers even as a rookie. Well you'd be right. In 54 games the Edmonton native has a whopping 110 points, clearly too good for the league he's in.

He's not big either although he's not as short as Thomson. Still, 5'10 and 182 lbs raises the usual questions regarding an ability to compete in a North American pro rink. Still... with that amount of production, what's the downside to a tryout?

Finally, here are some other Golden Bears past and present who might be worthy of consideration: 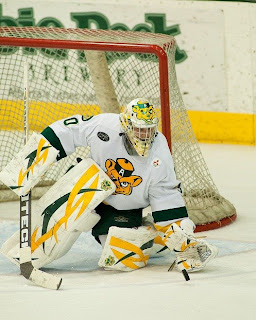 - Ian Mcdonald was a Kyle Brodziak like 92-point man in his final WHL year and at 6'3 and 200 lbs could provide a power forward presence at the AHL level.

- Aaron Sorochan was arguably the best goalie at Oilers camp a couple of Septembers ago and is only getting better with age. He's picked up a pile of CIS hardware for his individual performances and should be worthy of a pro contract when his UofA days are done.

- Ben Kilgour is to the Golden Bears as Ryan Smyth was to the Oilers; a heart and soul player willing to sacrafice his body in front of the net or in the corners. He's has enjoyed three +40-point years at the UofA and his eligibility runs out at the end the month.

- Tim Krymusa spent 5 seasons with the Spokane Chiefs and then 5 more at the UofA. He's a talented 2-way guy who is also playing in Germany this year and has 29 goals and 65 points in 55 games for Passau Black Hawks in the Oberliga.

- Brad Tutschek is a former Daum player at the UofA and is playing in the DEL for the third straight year. At the UofA he was one of Daum's most dangerous offensive weapons.

Like I said before, I know many of you reading this will discount these players for their CIS background and even now playing in Germany. Consider this; Ryan Huddy was given a tryout and subsequently signed a contract this year after playing in Germany for two seasons. His stats? You can see for yourself that he simply does not measure up to the players I have listed above. Obviously his name bar played a role in getting the camp invite but... does that mean he didn't earn the contract based on his camp performance?

There are some talented players listed above and many of them enjoyed their best years playing for Rob Daum. Why wouldn't camp invites next year make a lot of sense? Clearly it couldn't fail any worse than the status quo in Springfield.
Posted by Guy Flaming @ 3:08 PM

Thanks for those names, Guy. I don't often comment here but I always read the stuff you write.

I would love to see Harlan Anderson and/or Aaron Sorochan in the Oilers' system. They where my favorite bears, in the years in which the Bears were the only games I could afford to see in person. Plus, they were always a class above the other players on the ice (but Anderson seemed small in Drake Arena, so I think he would look like a midget in Rexall).

BCB: Harlan Anderson is listed at 6'2 and 190 lbs so I think you must be thinking of someone else. Perry Johnson perhaps?

One more name & Daum tag-along: Kevin Marsh. Stellar winger for the G-Bears from 99-'04 and played a pair of games with Houston before doing the CHL/Denmark/Sweden shuffle. He's currently in Aalborg, Denmark (a league I'd deem on par with Ger-2) and has racked up 20pts in 26 games (limited games due to injury, perhaps?).

The CIS is a quality league. The league is full of players who chose to pursue academics yet still love the game enough to keep playing. They are often intelligent, workman-like role players. If Daum does bring back a couple, I'd suggest they'll bode well as character guys on the young Falcons club.