One on One: Brandon Lockerby 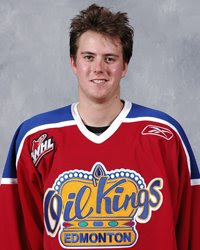 Last Friday during the Edmonton Oil Kings broadcast I had the opportunity to fill in for regular colour analyst Kent Simpson. Part of the duties of the colour guy is to pre-record a player interview before the game for use during the first intermission and on this particular occasion I chose to chat with defenceman Brandon Lockerby.

"Locks" was originally property of the Brandon Wheat Kings which automatically makes him Dean Millard's favorite Oil King player. He was a 7th round pick back in 2003 for the Wheaties and he played 40 games for them in 2006-07.

The Edmonton Oil Kings grabbed him in the expansion draft and he went on to score 7 goals and 14 points while appearing in just 36 games due to injury. Late in the season the Edmonton ran into injury trouble on their blueline and the team lloked to Lockerby to make a shift from forward to defence. He'd had some experience in the position and was actually planning to make that change in Brandon before the expansion draft. 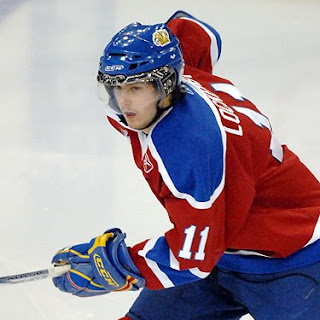 This year Lockerby has been a full time blueliner and as the lone 20-year-old on the backend, he's been the leader for the rearguard corps.

I asked him to reflect on his time with the Oil Kings, the stretch run to the playoffs and what happens next year when his WHL career is behind him.

You can hear this exclusive interview with Brandon Lockerby HERE.

My thanks to A.J. Jacubec for allowing me to sit in on the broadcast with him for the second time this season. Also thanks to Kent Simpson for leaving town- you're a good guy and all Kent but... feel free to go more often!
Posted by Guy Flaming @ 9:02 PM