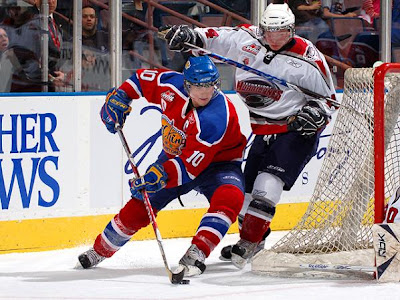 Lee, who joined the Oil Kings midway though the 2007-08 season after leaving the NCAA's Alaska-Fairbanks Nanooks, had a career year posting 22 goals and 62 points.

The Calgary product is considered a hot commodity for CIS schools looking to bolster their line ups for next year and Lee told me yesterday that unless he had AHL options, CIS would be his route next year. With a good showing in Springfield, his AHL chances could become a reality.

Also headed to the AHL for the rest of the year is forward Brent Raedeke who will join the Grand Rapids Griffins. Raedeke was signed by the Detroit Red Wings last fall after attending their summer camp and main camp in September as a free agent invite.

The watch is on for goaltender Torrie Jung who will wait to hear from Tampa Bay as to whether they'll send him to Norfolk (AHL) or more importantly, offer a contract. If not, Jung returns to the draft where he most certainly will get re-drafted.
Posted by Guy Flaming @ 2:17 PM