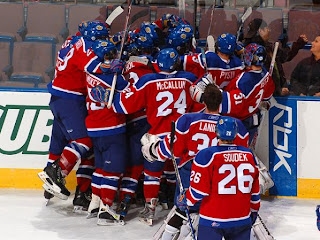 It took extra time in an extra game but the Edmonton Oil Kings have made it to the WHL playoffs in their second year or existence thanks to a thrilling 2-1 victory in Prince Albert.

72 regular season games wasn't enough and neither was regulation time in the 1-game playoff. It wasn't until 17-year-old Rhett Rachinski (pictured below) scored at the 8:54 mark of overtime that season-long race between Edmonton and Prince Albert finally came to an end.

The Oil Kings scored the night's first goal in the opening period, just as they had in both weekend matches against Red Deer. The Raiders evened the game in the second frame and neither side could find a way to solve netminders Torrie Jung and Garrett Zemlak. The second period was definitely the weak spot for Edmonton as the Raiders dominated play and held their visitors off the shot clock for an extended period of time. The total shots in the middle frame alone were 12-7 in favor of P.A.

However, in overtime when it counted it was the Oil Kings who garnered the most scoring opportunities firing 10 shots at Zemlak compared to just 2 mustered by Prince Albert.

The final shot tally was 42-36 for Edmonton but the only number the O.K. Kids are thinking about right now is the 2-1 final.

The big win sets up a Edmonton VS Calgary first round battle. Can the Oil Kings hope to compete against the juggernaut that is the Calgary Hitmen this year? We'll get into that tomorrow... for now we'll let the home town guys bask in the glory of the moment.
Posted by Guy Flaming @ 10:19 PM