One on One: Landon Ferraro 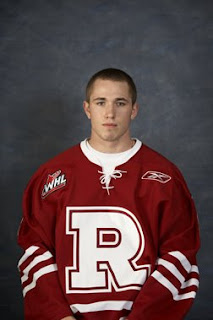 Last week the Red Deer Rebels came to town and I had a chance to speak with a couple of the 2009 eligible players on the roster. I've spoken with a lot of prospects over the last several years but few come close to the level of articulate, intelligent and engaging interviews as I had with Landon Ferraro.

Everyone knows him as the son of Ray Ferraro and I think it's safe to say that you could identify that connection just by hearing Landon speak - they have almost exactly the same voices.

Verbally Landon is as polished as they come and yet he's not one of those young players who enters an interview armed with a book of clichés. You can hear that he's smart and isn't afraid to speak his mind, like when I asked him about the Top Prospects Game. It's hard to believe he hasn't hit his 18th birthday yet.

I wrote a player feature on Ferraro for Hockey's Future based on this interview and it was released this morning. You can read that feature at HF by clicking HERE. To listen to the interview in its original form click HERE.
Posted by Guy Flaming @ 2:30 PM