The Bulldogs stop the upset insanity in NCAA tournament action 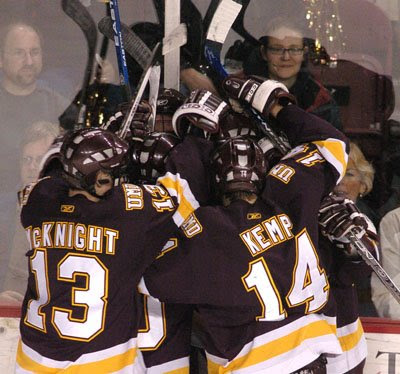 Wow, what a first day of the NCCA tournament. Minnesota-Duluth became the only favorite to win their opening game, needing overtime to sneak past Princeton 5-4. Brett Wilson scored a pair as the Tigers took a 4-2 lead into the 3rd. Only a Camrose Kodiak connection saved the season for the UMD Bulldogs. With one second left, Evan Oberg scored a goal set up by MacGregor Sharp and Mike Connolly to force overtime. The AJHL came through for the Bulldogs in overtime as Connolly finished off a set up from Oberg and former Bonnyville Pontiac Justin Fontaine. 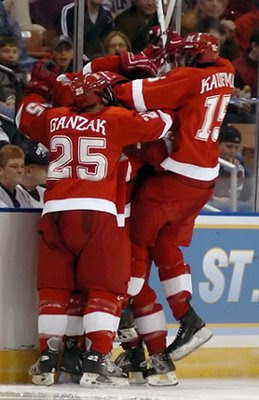 Meanwhile, after Air Force got things going (see Guy's post below) then Miami took out the 3rd ranked Denver Pioneers 4-2. The Redhawks who lost out in the their conference playoffs and needed an at large bid to the big dance, advances to the regional final for the 3rd straight year, but for the first time in 4 straight years won't have to worry about losing to Boston College. Miami jumped out to a 3-0 lead in the second period where they outshot Denver 12-3. Former Camrose Kodiak and TPS blogger Joe Colborne got the Pioneers on the board in the middle frame but Andy Miele regained the 3 goal lead for Miami before the intermission. Denver's Tyler Bozak, a former TPS guest scored in the 3rd to get Denver within 2 again, but that was as close as they would come. Bozak was playing his first game since December 12th due to a knee injury. Miami will now take on Minnesota-Duluth tomorrow in the regional final.

In the other tilt today, yes another underdog comes up large. After it seemed like they called in sick for their conference playoffs, while they partied in Tijuana, Vermont used their wild card bid to oust Yale 4-1. 4 different Catamounts scored for Vermont, while noone had more than a point. Yale's only goal came with just 1:45 to go. So Saturday it will be Vermont taking on Air Force in their Regional Final.

Also on the sked for Saturday: