Observations on the WHL Western Conference Playoffs so Far.

The Down-Low with Bristowe

Observations on the Western Conference Playoffs so far.

As expected the Prince George Cougars were easily dispatched by the Vancouver Giants in 4 straight. The Giants dominated the first two games in Vancouver winning 8-2 and 9-1. The Cougars looked much better at home which was not a huge surprise considering 18 of their 25 wins came in their own barn. The Cats did not have enough even at home as the Giants rounded out the series with a pair of 3-2 wins, the first one came in overtime. 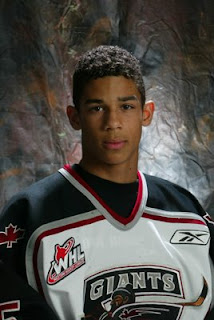 The Giants looked like a team that could be had. When the Cougars played physical Vancouver backed down. Tyson Sexsmith looked very bad on a few of the Cougars goals, but he also did save the game late in the second period in game 3 with the score tied at 2 on a save that should be one of the top 5 WHL plays of the week. The Giants managed to wrap up the series in front of a couple of their big bosses. Giants owner Ron Toigo made his way to Prince George for the final game of the series along with another person that has a stake in the team, Pat Quinn. I managed to catch up to Pat and will have that interview on Cougar View airing tomorrow on CKPG TV at 4:00 p.m. pacific time and rebroadcast at 6:00 p.m. and 11:00 p.m. Saturday (Star Choice Satellite channel 325.) 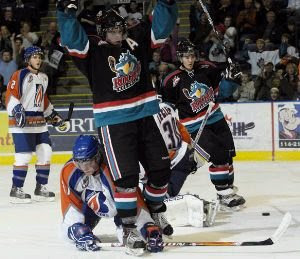 Surprisingly the Kamloops Blazers bowed out in 4 consecutive games against the Kelowna Rockets. The Blazers managed to score the first goal in 3 of the 4 games, and it looked like they had atleast one win as they were up 2-1 in the third game with 3 seconds to go. The Rockets tied it and then won it in overtime. In game 4 they would complete the sweep winning 5-3.

The other two series are still going states side. Spokane is up 3 games to one on the Thunderbirds after taking both games in the Seattle. The Chiefs can wrap it up on Saturday at home. Tri-City has a 2 to 1 series advantage over Everett with game 4 set for Everett on Friday. Chet Pickard has played all 3 games so far after returning from a concussion late in the season.

Right now it looks like the top 4 teams are on a collision course for the second round out west. Likely you won’t see any sweeps in the next round with each team a league contender.

That’s the Down-Low with Bristowe.