Earlier today we checked in with the Swiss for our WJC team by team preview. Now it's time to look at the country that has a gold and 2 bronze medals in the last 3 years, team U.S.A.

1- Jack Campbell - The Dallas Stars 2010 first rounder is a gold medal machine for the stars and stripes. He saved the U.S. in 2010 winning gold where he was named top tender. He won back to back U18 golds and also owns a Bronze from last year's WJC. While there are some who aren't sold on Campbell (they are all Canadians by the way) he has to come into the tournament as the top goaltender. He's calm, cool and collected and will be taking part in his 3rd tournament. 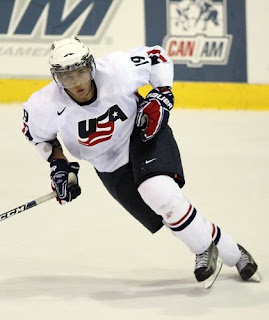 2- Emerson Etem - The Medicine Hat Tiger sniper had a very underwhelming tournament last year for the States in Buffalo. He could have been rattled by the negative attention he brought upon himself when he called Buffalo 'the worst city ever' and said it made Medicine Hat look like 'Paradise' before going on to record just a single point. So far the Anaheim draft pick has 3N goals in 34 games with the Tigers and will be the go to guy starting Boxing Day.

3 - Nick Bjugstad - The hulking forward is like the Xmen character Juggernaut when he gets going. But how will an upper body (many believe it to be a shoulder) affect him during the tournament as he didn't suit up in any of the pre tournament games. When he's healthy he can dominate as his 27 points in 20 games with Minnesota would attest to.

Jon Merrill - Before pre tournament action Merrill hadn't played a game since April because he was suspended by Michigan for 11 games of the NCAA season. He's good, but is he good enough to shake off that much rust? Team USA's blue line hopes so because he is a vital part of what should be the best back end in the tournament.

Expectations: I'm not sure if the U.S expects to win gold every tournament yet, but they do expect a medal.