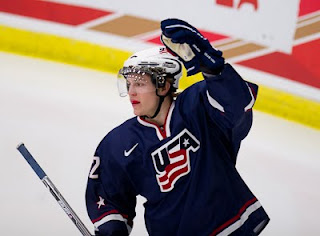 He's not a big guy but Austin Czarnik is playing a big role for USA at the 2012 World Junior Championship. Yesterday in Edmonton the diminutive forward played alongside a pair of high caliber Golden Gophers and didn't look out of place one bit. In fact, one could argue that it was the 5'8 Miami RedHawk that was the catalyst on the line.

I chatted with Czarnik after the game.


The native of Washington, Michigan is enjoying his freshman year at Miami as he sits second in team scoring with 16 points after 19 games. He arrived in Ohio after a year with the Green Bay Gamblers of the USHL which followed a stint with the US-NTDP.

There was some thought at one point that he may consider the OHL where cousin Robbie played for a couple of seasons after leaving the Michigan Wolverines program. That didn't happen and now the undrafted 19-year-old is flourishing with The Brotherhood.

I asked Czarnik if his role with USA at the WJC differs at all from his job description with the RedHawks.

"No it's pretty much the same," he said, "I just try to get all over the ice, finish my checks, make good plays and score goals." 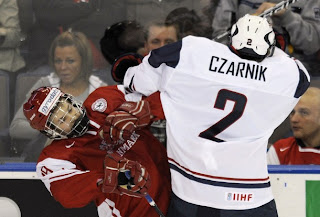 Finishing his checks is something Czarnik has certainly been able to do since arriving in Alberta. That talent was on full display in an exhibition game last week against Denmark and again last night when the two teams met on the first day of the tournament.

Despite his small 152 lb. frame, Czarnik has an ability to not just run into opposing players but level them. It's a source of pride for him and the reason he thinks he made the American WJC squad.

"I agree, you want a hard working guy that finishes his checks, blocks shots and provides high energy and I think I bring that to the table so it's gone pretty well so far," he said, "That's something that I've tried to establish in my game growing up; my dad always told me to finish my checks so I've been working on it."

Back in Miami, Czarnik plays with Curtis McKenzie and Reilly Smith and also for coach Enrico Blasi, both Canadian. I asked the Michigan native if there are any side bets riding on New Year's Eve when the two nations will meet.

"[They] obviously want Canada to win but I keep chirping them and they give it back so it's pretty funny."

Czarnik had two assists in the game yesterday against Denmark and likely established himself in the top-6 for USA. He's small and undrafted but he's a player that NHL teams have to be taking notice of now on the big stage. At Miami he's following int he footsteps of small skilled players like Andy Miele and Carter Camper and like both of them, stands a very good chance of earning a free agent contract when his time with the RedHawks is done.