No Surprises on Final USA Roster

Almost immediately after Wednesday night's 7-3 victory in Camrose over Switzerland, the USA Hockey brass and coaching staff got to work on cutting players from their camp. The final 22-man roster was named early on Thursday and didn't stun anyone although at least one player has already voiced his disappointment.


With Seth Jones on the shelf with an injured shoulder there was only one defenceman to trim to get to 7. I speculated on Wednesday that it would come down to Austin Levi and Kevin Gravel and as it turned out, Levi was sent back to the CHL's Plymouth Whalers.

Of the four forwards who were released, only one played in the game against the Swiss so it's clear that USA Hockey had weeded out Shane Prince, John Gaudreau and Brian Ferlan earlier. Yale Bulldog Kenny Agostino was the final forward cut from camp. 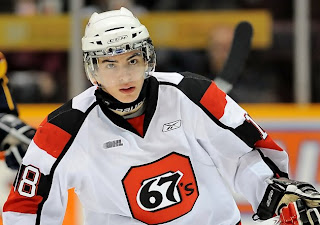 Prince, a high profile member of the OHL's Ottawa 67's and a draft pick of the Ottawa Senators, didn't hold back from sharing his feelings later in the day.

Prince told me the same thing about his 6 or 7 shifts during an intermission at the Swiss game on Wednesday. It's unfortunate that he didn't get a shot higher on the depth chart but those are the breaks at a camp as competitive as USA's or Canada's. Prince's OHL teammates Tyler Toffoli and Cody Ceci were both released by Canada last week.

We've mentioned it several times on the show lately and have written about it here on the blog; USA is going to be a team in contention this year, I have no doubt about it. Few teams share their size on either the backend or up front, and they haven't had to sacrifice speed at all to get it.

Their starting netminder is back for his third tournament and has always risen to the challenge of the big stage. Leadership will be aplenty with the likes of Jason Zucker, Jarred Tinordi, Charlie Coyle, Nick Bjugstad and Austin Watson.

The team will be able to throw a full compliment of offensive stars, power forwards to shut down the opposition, smallish but tenacious forecheckers and nearly all of them boast an abundance of wheels.

Behind the bench USA has the only American coach to have won WJC gold on Canadian soil and also has the head coach from the defending NCAA National Champion Duluth Bulldogs as well.

If this team isn't playing for gold on January 5th, it should be considered a disappointment because they are certainly talented enough to win it all.
Posted by Guy Flaming @ 9:00 PM