Makarov to Play for Russia at U20 WJC

Russia is holding a preliminary WJC camp in Novogorsk beginning December 7th but will also add players to the final team who are currently skating in the CHL. Last week NHL.com scribe Mike Morreale posted the camp list which you can find here. You can be sure that players like Nail Yakupov and Mikhail Grigorenko will be added to the team when they arrive in Calgary on December 18th.

One other player you can add will be a goaltender playing in the WHL. The Pipeline Show has learned that Saskatoon Blades netminder Andrey Makarov has already been named to the team. 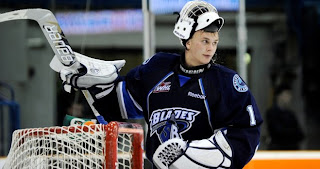 The Blades were in town on Sunday to play the Edmonton Oil Kings in a Western Hockey League game. I spoke with Makarov for a few minutes before the game to discuss his anticipation of the World Junior Championship coming up later this month.

I asked the Kazan product if he knew his status for the Russian U20 team or if, at this point, he was still just hopeful of playing in the 2012 WJC.

For clarification I asked whether that was still for a tryout or if that was to join the final team. 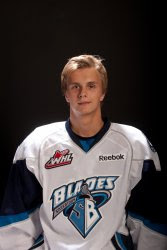 "I am on the team," Makarov firmly stated, "The camp is in Russia right now, or it starts soon (Dec 7th)."

The 6'1 goaltender says that he was notified of making the team shortly after the Subway Super Series that pitted a traveling Russian squad in six cross Canada exhibition games against the three CHL leagues. Makarov played both games for the Russians against the WHL.

"After the last game of the Subway Series the coach told me to 'be ready for the World Championship' and I said 'OK'," Makarov explained, "I know the coach but I don't know who the other goalie will be."

Makarov was originally scheduled to play in only the first of the two Russia/WHL games but says that changed when he joined the club in Moose Jaw.

"[Saskatoon coach] Lorne Molleken told me that I would only be playing in one game and that didn't matter to me," said the goalie, "The next day the coach came to me from the airport and said 'are you ready to play two games?' and I said 'yeah, I'm ready'. He told me 'OK then you will play in two games' and I said 'thank you, that's very nice for me'. It was good for me."

Finally, I asked the personable goalie if he thought that Russia would be good enough this year to win the gold medal.

"I don't know... every team is good now but we'll try to win the gold medal," he smiled, "It's my dream to be a world champion." 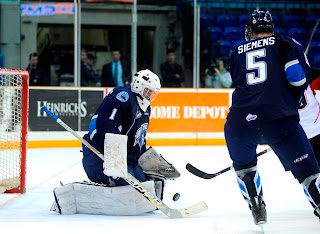 The fact that the tournament will be held in WHL rinks, specifically in Calgary for Russia's pool, does that benefit him at all as a goalie who won't be a stranger to the Saddledome?

"I know Calgary, it's a pretty good rink," he said, "It's a NHL rink and a big rink, probably lots of fans will come to watch the games and I love it that way."

Makarov is in his second season in the CHL having played for the QMJHL's Lewiston Maineiacs last year. His rights went up for grabs when the Maineiacs folded at the end of the 2010-11 campaign.

Makarov talked to me about the differences between the QMJHL and the WHL, how he feels about Western Canada and more. You'll be able to hear that entire interview during the next edition of The Pipeline Show this coming Wednesday - a rare bump in schedule from our regular Tuesday as we move aside for an Edmonton Oil Kings broadcast.

He is the top-ranked netminder available from the WHL for the 2012 NHL Entry Draft according to NHL Central Scouting. Thus far this year he has 17-9-0 record with a 2.90 GAA and .916 SV%.