The Potential for the Oil Kings is Limitless 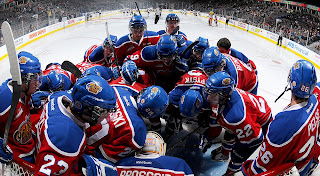 The Oil Kings won very convincingly Thursday night at Rexall Place thumping the Calgary Hitmen 6-1. It was one of their best and most entertaining wins this year, and there have been a lot to choose from with a 10-2 record at home. The game had just about everything fans want to see. A fast pace with big hits, very good goaltending at one end and lot's of goals at the other. The crowd was also into the contest as the more then 5600 were loud all night long. The rink was also packed with scouts. From head men of NHL teams to the boss of NHL Central Scouting Dan Marr it was a fun atmosphere.

The Oil Kings are really rolling right now, and it reminds me a little of the movie Limitless. Like Bradley Cooper's character there were expectations on the Kings, and while they didn't struggle out of the gate they were fairly average. Subsitute the 'pill' that Cooper's character took with very good coaching, high end and depth scoring and exceptional goaltending and you have a character/team that you really enjoy watching. And while of course there is a crash from being so brilliant, in this case a losing streak - Edmonton's longest thus far is 3 and 4 in 5 through BC - the way this club is going I don't see any 5-7 game skids that can derail the hopes of hosting a playoff series. Or any raging bachelor parties like Cooper's other movie. Here are a number of reasons why the Edmonton Oil Kings are surging at the moment with 8 games to go until the halfway point of the season. 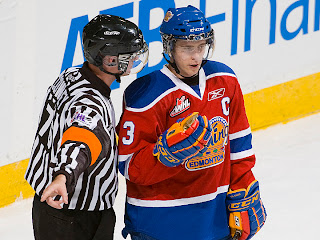 -Mark Pysyk
The captain is leading the charge as Pysyk is playing some of the best hockey in his junior career, just like he did last year after being invited to Hockey Canada's camp. Voice of the Oil Kings Corey Graham put it best on the broadcast Thursday that 'Pysyk is being assertive' and i couldn't agree more. He's never going to be a bruiser, but he's definitely not a push over, in fact he's now doing some of the pushing around. At the other end he's been very active as well. Like his physical play, Pysyk isn't knocking over goalies with his shot, but he's using his feet and brain to set up teammates and join the rush effectively He used his speed on one goal Thursday as a decoy, as he had the dman thinking he was going to go wide and instead feathered a short pass to T.J Foster for the 6th and final goal. It was a perfect illustration about how speed and smarts can win against the physical game. I didn't originally have Pysyk on my World Junior team heading into camp (and man have I heard about) but if he plays this way at camp he'll make the team no question. 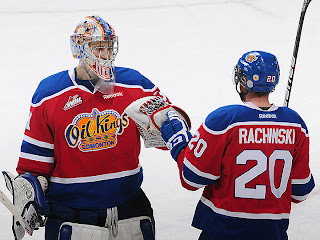 -Laurent Brossoit
"The Oil Kings are getting the best goaltending since Torrie Jung led them in the playoffs against Calgary" Guy Flaming, Wednesday night. I have to admit Guy is right, that's not fun to do, but it happens a lot, just like wins for Brossoit. He's top 4 in wins, top 3 in gaa, top 6 in Save per cent age and top 4 in minutes played. Speaking with scouts at Thursdays game the biggest improvement in Brossoit's game has been how he follows the puck. I find him more focused and in control. Fluid is a term one scout mentioned and I agree. That comes with maturity and the fact that he knows he's the #1 guy. Most of us would feel and preform better if we had the confidence Brossoit is playing with right now. He made a terrific save Thursday, missing with the poke check but staying in position, following the puck and robbing a goal with his left pad. Another he stacked the sears catalogues (old street hockey reference) and once somehow found the puck on a shoulder high shot through a crowd and made a sweet blocker save. He's big, agile and really in control, and a lot of the credit goes to goalie coach Dustin Schwartz who worked with Lyle Mast for years and is using the OR Sports technique. 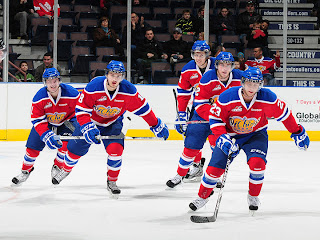 -A+ for chemistry
Dylan Wruck and Michael St. Croix are brewing up something special right now. The dynamic duo have combined for 29 points in their last 7 games. I recently sat them down for a Global TV story and found out they are pretty tight off the ice as well and very competitive. St. Croix won the moustache growing contest, but Wruck gets the nod in goal celebration. They both think St. Croix is a better gamer but that Wruck would win in a game of one on one hoops. But what happens when someone comes between BFF's? The dynamic duo becomes a terrific trio as they have since Tyler Maxwell joined the team. The new line mate scored twice against the Hitmen giving him 4 in 4 games to go along with 2 helpers and a plus 8 rating. The over aged centre had 14 points and was -5 in 14 games with Everett before the deal. 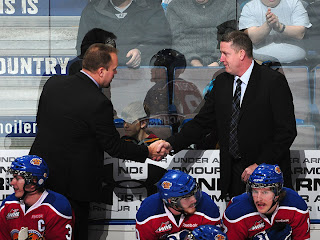 -Coaching and Management
Derek Laxdal, Steve Hamilton, Jesse Pearson and the aforementioned Schwartz are doing a great job pushing all the right buttons and guiding this club. From the right line combos, to playing the 3rd line a little bit more to change the momentum. I really like new penalty killing set up the team is using. One forward at the opposing blue line, 2 defenceman in the neutral zone and a forward back at their own blue line. I first notices them using it last Friday against Medicine Hat. since then they have killed off 17 straight penalties. Bob Green along with Randy Hansch and the scouting staff deserve a lot of credit as well. Getting Maxwell from the Silver Tips looks like a genius move right now and convincing Cody Corbett to come north from the Minnesota High School Hokey league is looking great as well. Corbett and Mark Pysyk have looked great together. Both can skate and think the game. In 13 games Corbett is +11, good for 3rd spot on the team. About the only thing Green might need to add is size and grit, but then again that could be as simple as Travis Ewanyk returning to the line up. He's scheduled to be back in March, which would be just in time for a playoff run. As Corey Graham reported during the OK Kids game versus Spokane Tuesday, Ewanyk started skating this week. When I talked to Ewanyk and the team staff I was told he's ahead of schedule and things are going great. That doesn't mean he will be ready in April, but that the recovery is going well and he can at least get back on the ice now. Getting a future captain back will be like making a trade and give the team 3 very solid lines to go along with their 'can do everything' blue line.

What the Kings will have to get through is the Christmas season. They could lose Pysyk, Kristans Pelss, and Martin Gernat to the World Junior Hockey Championship and Curtis Lazar, Mason Geertsen and Tristan Jarry to the U17 Worlds. Thankfully as you can see they have many spokes in the wheel and they're all rolling along nicely.
Posted by Dean Millard @ 6:00 AM