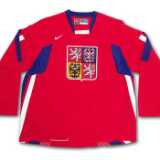 Earlier today we profiled Slovakia for the upcoming World Junior Hockey Championship. Now it's time to feature their former country mates from the Czech Republic.

1- Petr Mrazek - It's mind boggling that this is Mrazek's first kick at the World Junior Championship. He has been considered the best goalie in the Czech Republic for some time but the Red Wing draft pick wasn't allowed to play for his country at this tournament the past few years because of his CHL situation. He plays with the Ottawa 67's and whether it was stubbornness on the part of the Czech hockey federation or not it was silly that he wasn't playing. The countries chances have increased quite a bit with him on the roster. 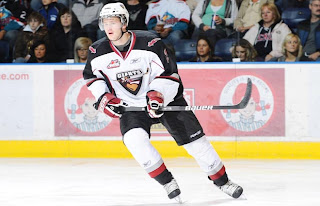 2- David Musil - The hulking blue liner gets to play his round robin games in the city he was born in. The son of Frank, David was born while his dad was playing with the Oilers, but he's always suited up for the Czech Repbulic. He plays in Vancouver and was drafted by the Oilers in 2011. Some scouts think he's an Adam Foote type blue liner and he'll have to be strong and tough for the Czech's to win.

3 - Martin Frk - There's no question Frk would lead this team offensively, if he was healthy. He's been named to the team but has played just 7 games this year for Halifax because of a concussion. Frk is a very important player for his country and this is a very important tournament for the highly skilled 2012 draft eligible forward.

Radek Faksa - While a lot of 2012 draft talk surrounds Frk, Faksa could steal some of the spotlight with a strong tournament. Most publications have Faksa as a 2nd half first round guy. He's 6.03 and 200 pounds and is over a point per game with Kitchener of the OHL. ISS says Faksa loves the North American game so it should be interesting when he faces hard hitting teams like the States and Canada.

Expectations: The Czech's would love to say they expect a medal, but really it's not true. They want at least a bronze medal game but a strong round robin will still be an accomplishment.

Predictions: They could nip Slovakia in a placement game, but I don't see them making noise in the medal round. 5th-6th.
Posted by Dean Millard @ 2:00 PM