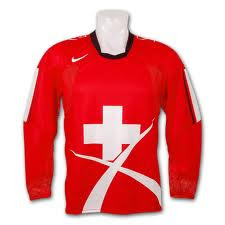 We're down to our final four when it comes to World Junior Championship team previews. Still to come, the U.S, Canada, Russia and right now the Swiss.

1 - Can they clone Bartschi? The Flames draft pick and Portland Winterhawk is easily the most talented Swiss player and is likely in the top 5 when it comes to pure skill in the tournament. But he's only one man and unfortunately won't have Nino Niederreiter to take some of the pressure off of him this year. Bartschi will face the toughest defenders each shift. He scored a dandy against the States Wednesday night but was fairly ineffective against Canada and at times looked off his game and Canada seemed to be under his skin. 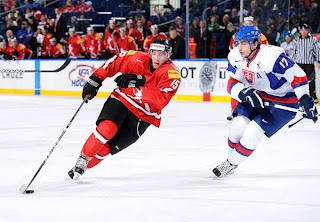 2 - Wolf in Swiss clothing - Tim Wolf took on the Canadians Thursday and while he wasn't howling with happiness after the game he did say it was a confidence booster as well as a wake up call for what he can expect when the games begin. Wolf faced 51 shots and gave up 7 goals including a few where he had no chance. If Wolf can somehow muster up a performance similar to what Benjamin Conz did 2 years ago for the Swiss then they'll be ripe to upset someone, but I just don't see it happening.

3 - Lightweight Lino Martschini - He's the smallest at 5.8 and lightest at 132 pounds in the entire tournament, but Lino Martschini will use the strategy that if they can't catch you they can't hit you. He plays for Peterborough so the rough stuff he might face won't be a surprise. The 18 year olds numbers aren't bad with 23 points in 33 games. Last year he was just short of being a point per game player for the Petes.

Along with having the smallest and lightest player, the Swiss also have the youngest. Phil Baltisberger just turned 16 last month. He's a 6.0 blue liner who isn't eligible until the 2014 NHL draft, so scouts will have a few years to watch him develop.

Expectations: The Swiss would be thrilled just to play for Bronze like they did in Saskatoon 2 years ago.

Predictions: it's not their year, they will battle it out for 7th-8th.
Posted by Dean Millard @ 6:00 AM