Red Vs. White Vs. Connolly 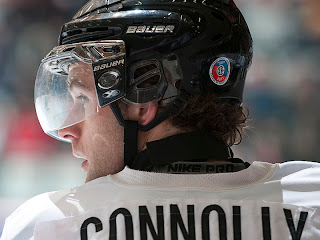 Team Canada's inter squad game Monday night produced only one goal that beat a goalie, but plenty of hits and one injury. One returning player may have knocked another out of the tournament. Or Quinton Howden will be ok and able to fill a huge roll for Canada starting Boxing Day in Edmonton. Either way Brett Connolly seems to be taking a lot of heat right now. 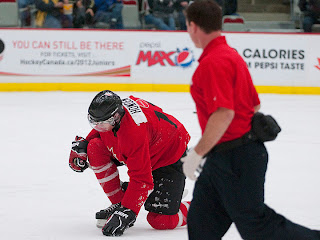 Connolly finished his check on Howden Monday night and the Moose Jaw Warrior forward left the game in pain. It could be a shoulder or it could be a head injury. Some have suggested it was after the whistle, but it wasn't, and after watching it on TV and online it looks like Connolly actually slowed up a little.

After the first day of practice and red/white game the HC brass told Connolly they wanted more from him. He needed to give more and I truly believe he was just trying to play a little harder. If he stopped finishing checks then maybe he doesn't make this team or is ineffective.

While some media have ripped Connolly some in the hockey world don't see anything wrong with it. One long time hockey management personnel said 'if you don't want injuries, don't have a camp.". Another in the hockey world simply said "don't have inter squad games if you want to try and avoid injuries, but really you can't. Just let them play hard and hope for the best. I mean it's not like they're throwing a puck in the corner and asking who wants it from Youngblood."

I really hope Howden is OK and I also hope Connolly doesn't become the whipping boy for this team by the media. While I will say he does have to be better, I think he will. 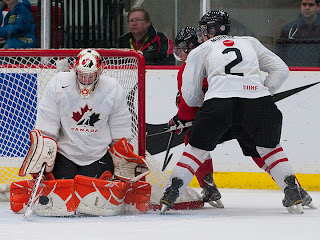 Tyler Bunz really impressed me Monday night. He entered the game and faced back to back 5 on 3 team white PP's and didn't allow a goal until Mark Stone banged in a 3rd period rebound. Bunz also make a snazzy glove save. I spoke to him about his personality and how it should work perfectly in a pressure packed tournament like the WJC. You can hear some of that conversation Tuesday night. You'll also hear who our CHL Insider Sam Cosentino has the inside track on being the main pipe man.

Boone Jenner was physical and Nathan Beaulieu let fly a few one time howitzers on one of the many team white power plays. The PK units definitely won out on this night and while there haven't been a lot of goals, this group is to talented to be shut down. I think once they're a group taking on the CIS club and through the pre tournament games you'll see plenty of offence. Remember this is a team without Jonathan Huberdeau right now.

It's also a team that will have less players in the morning when 7-8 players are sadly sent packing. We'll chat with Hockey Canada Head Scout Kevin Prendergast about the players who are no longer in camp and how the team is taking shape moving forward.
You can find out all the details and listen on line, here. You can also have your say in our poll question about the Brett Connolly hit on Quinton Howden.