Yesterday we kicked off our team by team preview for the upcoming World Junior Hockey Championship. You can read up on Latvia and Denmark by clicking here and here. Here is a closer look at Slovakia.

1-Marty's Party on the blue line - Slovakia's blue line could be anchored by a couple of Oiler prospects in Martin Gernat and Martin Marincin. The pair who measure up at 6.05 and 6.04 respectively, are from the same home town of Kosice. Gernat (below) started the year on fire but ran into the wall that Europeans usually hit at some point in their first junior season. They simply tire out, but if it happens earlier enough the player can bounce back. Marincin did the same last year, but it seems has yet to bounce back. He had more points in the month of October last year then his 16 he has this season. Slovakia needs the two towers of power to be charged up if they are going to be able to shut down the opposition. 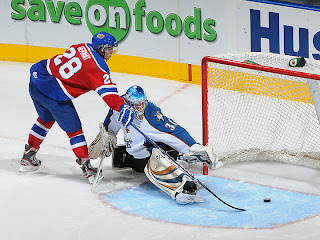 2- Tomas Jurco - The Saint John Sea Dog will be the straw that stirs Sovakia's drink. He's big and skilled and went through the CHL playoffs to win a Memorial Cup last year. Jurco will be looking to improve on his one point he notched in last year's event, and the Detroit Red Wings are excited to see him and how the 2nd round pick from last June measures up against the rest of the World. He's not on an Island with Slovakia, but the high end skill is pretty thin.

3. Paging Yan Lasak - I don't know anything about the Slovakian goaltending, but if they are anything like Yank Lasask in the 1999 tournament they'll be ok. Lasak stared down Canada at the Keystone Centre in Brandon that year, holding canada scoreless in a 0-0 tie. Dominik Riecicky is the only one of the 3 remaining goaltenders on Slovakia's roster with experience from this tournament. He posted a 3.37 gaa and .916 save per cent age in 5 games last year. Richard Sabol is a 2012 first time draft eligible player who previously suited up in U18 and U17 events, and Juraj Simboch is a 19 year old undrafted pipe man vying for one of two spots.

If Marek Tvrdon wants to face his junior head coach he'll have to lead Slovakia to a medal round berth and hope they draw Canada and Don Hay. The two are together with the Vancouver Giants. Tvrdon would also be taking on his line mate Brendan Gallagher.

Expectations: The Slovaks will celebrate if they can play for a medal and even a 4th place finish will feel like an accomplishment.