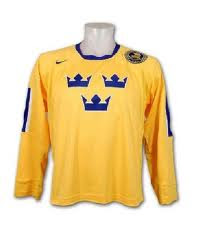 Merry Christmas everyone. We are now just one sleep away from the start of the - in my opinion - the best tournament around. With that in mind we present to you our final two team previews. Later today we'll profile Canada, but right now it's the Swedes we dive into.

1- Mika Mania - The Ottawa Senators took Mika Zibanejad 6th overall in June and thought seriously about keeping him in the capital city for the season. Instead after 7 games they sent him back to Sweden to play in the Elite league and to eventually excel at the World Junior Championship. He's big, fast, skilled and scored twice against Canada in pre tournament play. Most of the offence should come through him this year for team Sweden. 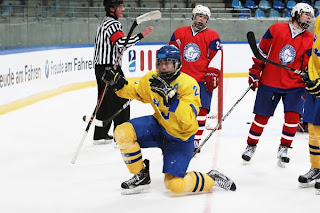 2 - Don't mess with the Johan? I'm still not sure who Sweden is taking for goaltenders as they still have 3 listed on their roster, or maybe they bring 3. I'm just guessing but I think they'll go with Johan Matsson and Johan Gustafsson. The latter played very well in defeating Canada in pre tournament play and both the Johan's are bigger. Sweden in the past has had great goaltending and whoever they take will have to live up to the standards left behind by Jacob Markstrom and Robin Lehner.

3- Foppa 2.0 - Anytime you have a Forsberg on your Swedish hockey team ears perk up. There could be two Forsbergs on the team if Anton makes it as a goaltender, but all eyes will be on Filip starting Boxing Day. He's projected to be a top 5 pick come June and as the youngest player on Team Sweden will need to fight for his ice time on a older team. Sweden has shown in the past it will give a young players ample ice time, but whether Forsberg gets the same treatment as Adam Larsson and Victor Hedman did remains to be seen.

In past years Sweden has come in as heavy gold medal contenders and failed to live up to the hype. This year they weren't generating a lot of buzz - until they beat Canada that is - and maybe that's a good thing. Can the Swedes really fly under the radar? I asked Anton Lander the other day who he would rather beat, Canada or Finland? Remember Canada beat the Swedes the last two years they played for gold. Lander, a former captain for team Sweden said in Canada he'd rather beat the hosts, otherwise it would be Sweden all the way. If Canada and Sweden meet let's hope the pace of play is as good as it was Friday night.

Expectations: Sweden might not be the flavour of the tournament going in, but make no mistake they expect to challenge for gold and at the very least win medal.

Prediction: 4th place,losing to their arch rival Finland.
Posted by Dean Millard @ 6:00 AM