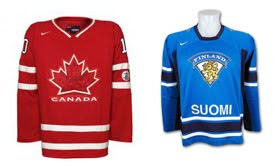 Most headlines after Canada's 8-1 blowout of Finland on Monday are probably along the lines of "Canada Stones Finland" or "Finland Stoned at WJC". Canadian forward Mark Stone registered a hat trick but Jonathan Huberdeau's 5-point night and Ryan Strome's 4-point effort should not be overlooked after game 1.


Canada dominated Finland in every aspect of the game on Monday. Finnish head coach Raimo Helminen was nearly at a loss for words during the post game press conference but suggested that his team was somehow not prepared for the Canadian team they faced in the tournament's opening contest. 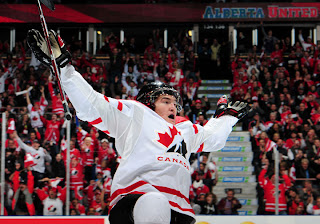 Stone scored his first of the game just 2:14 into the opening period and Brendan Gallagher increased the home side's lead to two goals barely two minutes later. Although Finland escaped the first period without allowing another goal, and even scored 1:21 into the second, they were never really in the game.

Starting the tournament off with a win is one thing but defeating a potential medal contending team by a resounding 8-1 score is quite different. It sends a pretty clear signal to the rest of the nations in the event that Canada's suspect offensive abilities are no longer in question.

I asked Brett Connolly after the game what winning so decisively meant for the team.

"You could say that was a message game to the rest of the tournament," he said, "8-1 is obviously a good score for us. We're happy with the game tonight but there are still areas where we can get better. If we can improve on those areas we'll be better collectively as a team."

The lopsided victory was not without its own loss though for Canada as Devante Smith-Pelly is reportedly done for the tournament after blocking a shot. The Anaheim prospect took the puck off the left boot and sustaining a broken foot.

Finland was also dealt an injury blow, maybe a pair of them. Netminder Sami Aittokallio (COL) took a shot in the collar bone before the game and left the warm up under some duress. With Christopher Gibson left largely to fend for himself, several people wondered why the Chicoutimi goalie wasn't given the mercy pull once the game was out of reach, which led to questions of Aittokallio's status.

After the game I asked Gibson what he takes from the huge loss. 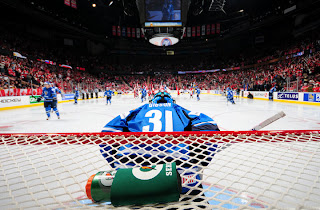 I also asked Gibson about staying in for the entire game and if he wanted to be relieved at any point.

"I wanted to stay, like I said, it's a great experience and a once in a lifetime chance even if it doesn't go as good as I was hoping it would, I was happy to play." said Gibson.

Gibson also said that Aittokallio was "feeling good now" after the game and that the coach could have pulled him so the pre-game injury doesn't sound serious to the Avalanche prospect.

2012 eligible defenceman Olli Maatta is not so lucky. He was drilled early in the game by Boone Jenner and, according to head coach Helminen in his post game address, appears to have suffered a concussion.

Stone, the leading scorer in the WHL right now, complimented his linemates and with Strome and Huberdeau the trio accumulated a dozen points. The last Canadian player to score a hat trick in the WJC was Brayden Schenn, another Wheat King, and Stone was clearly flattered to join his former teammate in that club.

"I didn't really know that," he began after Dean Millard pointed that stat out to him, "Just being mentioned with Brayden Schenn is something I'll honour obviously but it's good for our organization." 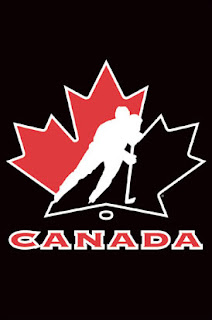 Defenceman Mark Pysyk's voice was raw during out post game conversation and says he didn't realize until after the game that he'd hurt it but said it must have been from yelling on the ice. The Oil Kings captain is a vocal but playing in front of the largest crowd of his career meant he had to raise the voice to a new level leaving him sounding rough afterward.

Head coach Don Hay is now 8-0 in World Junior play. He basically ran the gauntlet after the game making sure to credit everyone from goalie Mark Visentin to the fans. In fact, both coaches hoped the loud fanbase would be beneficial to their team.

"I thought that could help us too," said coach Helminen of the Finnish side, "It's a great place to play hockey but we are disappointed that we didn't show up as well as we would on our best day."

Finland will put this game in the trash can and focus on the rest of the tournament.

Next up for Finland is team USA while Canada will face the Czech Republic, both games come on Wednesday.
Posted by Guy Flaming @ 12:54 AM