USA Tunes Up on Switzerland 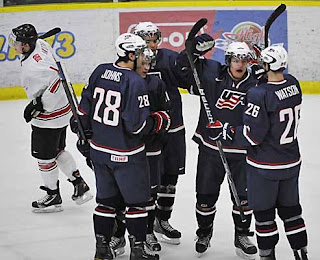 A night after being doubled up on by Russia, the United States rebounded to paste Switzerland 7-3 in 2012 WJC exhibition action in Camrose on Wednesday night. Brandon Saad's 5-point effort led the Americans to the convincing win on the eve before USA Hockey makes its final cuts in advance of the event beginning on Boxing Day.

The Pipeline Show was in attendance and spoke with several players and coach Blais after the contest.


USA was on the board before the Zamboni driver had even turned off his engine. Miami RedHawks forward Austin Czarnik pounced on a turnover by a Swiss defender, walked in unimpeded and beat netminder Lukas Meile just 23 seconds into the game. 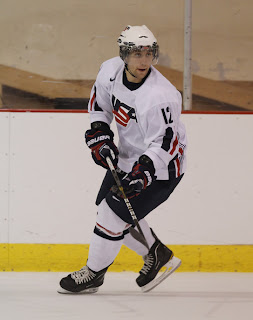 A scary incident for the Americans a couple of minutes later when forward Jason Zucker (MIN) was hit heavily along the boards in his own end. He gingerly made his way to the bench and was parked behind the rest of the players for several minutes. He looked to have been favoring his shoulder at first but the longer lasting damage was to his face.

"I caught an elbow to the face and then the boards to the face but, it's hockey and that's what happens," he said through bloody, swollen lips after the game. Zucker, like the rest of his teammates aside from 17-year-old Jacob Trouba, is wearing a half shield visor which obviously offers less protection than the full cage players are forced to wear in the NCAA.

Zucker's effort if relentless; The Denver Pioneers sophomore missed three or four shifts then returned to the ice to kill a penalty and crashed hard into the end boards while forechecking. Speed, hard working and a leader... Zucker is a prime candidate to be named captain.

There were not a lot of shots in the first 15 minutes of the game but one of them came from Zucker and it was difficult enough to produce a rebound. Saginaw's Brandon Saad (CHI) popped the loose puck home to give USA a 2-0 lead.

Shortly after that, Boston College forward Bill Arnold (CGY) strolled into the slot and casually took aim before he roofed a quick shot just under the crossbar beating Meile to the short side. It was a sniper's goal but the 4th round pick made it look easy.

The opening frame ended with USA ahead 3-0.

Switzerland would strike early into the middle period; Christoph Bertschy with Adam Clendening (CHI) in the penalty box. The pro-underdog crowd revealed its support for Switzerland despite the fact that USA Hockey as been using the town as home base for the past few days.

USA regained the 3-goal lead after a nifty tic-tac-toe play which began with Czarnik, to Saad and was finally finished off by Medicine Hat winger Emerson Etem (ANH).

One of the few bright spots on the night was pint-sized Peterborough Petes forward Lino Martschini who had a few terrific chances, none better than a breakaway created by Sven Bartschi (CGY). He failed to score though and that was the case all evening for the OHL import.

Jacob Trouba, physically asserting himself all night long, slap-passed a point shot to Charlie Coyle who tucked it behind an unsuspecting Swiss goalie making it 5-1. The underaged rearguard was impressive with his desire to play the body although he did stray too far a few times over the course of the evening.

"That's kind of the role I want to take on the team," Trouba told me after the game, "I think that physical defenceman is something we need more off and it's something that I can bring to the team."

The set up to Coyle was simple but perfectly timed, much like his answer.

"Just get the puck to the net and let him do the rest," he laughed, "Once you get the puck, [the forwards] are going there so it's just about getting it through."

It wasn't long after when Bartschi would find the back of the net and he did it in style. A partial breakaway for the Portland Winterhawks winger turned into a dazzling, unbelievable display of eye-foot-hand coordination. 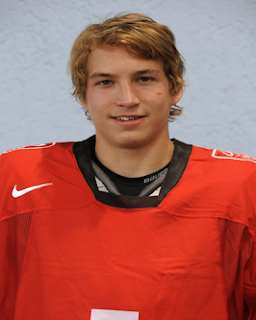 Bartschi's original shot was stopped by USA goalie John Gibson (ANH) but the Swiss sensation was able to corral the rebound by kicking it ahead with his foot. Just before it bounced into the net, Bartschi managed to get the blade of his stick on the airborne puck and deflected it in.

"I got really lucky when [an American defenceman] turned over the puck, everyone was just flying by me and I had a breakaway; I was really surprised.," described Bartschi after the game, "I came in and saw that the 5-hole was open so I tried to go for that and then it hit his pad, it came out and the only option that I had was like, to get it up with my skates. The puck was like, one foot away from line and I knew that I couldn't kick it in so I knew I had to put it in with my stick... so I did that."

"It's one of those things you practice at home or in the backyard or whatever."

Right before the end of the second period it was Saad leading the attack once again as he did all the work before sliding a pass to Notre Dame's T.J. Tynan (CLB) to fire into the net.

During the intermission I chatted with Ottawa 67's forward Shane Prince (OTT) who was sporting a few stitches after taking a head shot the night before against Russia. I asked Prince how he felt his camp had gone and he said that he'd done as much as he could with the opportunity that he'd been given. It doesn't look good for him though after playing just 6 shifts on Tuesday and being scratched for Wednesday's game but we'll find out on Thursday morning. 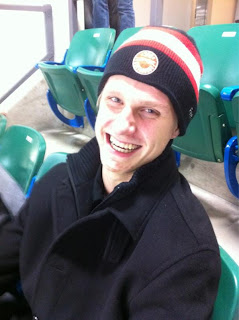 I also tracked down inured forward Nick Bjugstad who was sporting a Soo Greyhounds toque. As it turns out, goalie Jack Campbell didn't have a USA hat or toque to wear on the bench (as back up on Wednesday) so Bjugstad traded head wear for the game. Seeing the Minnesota Golden Gopher wearing an OHL team's toque made for a good picture though and Bjugstad laughed about the potential panic we could create on Twitter by posting the picture.

Bjugstad will be re-evaluated before Friday's final tune up against Slovakia.

In the third period, Gibson began to channel former Canadian keeper Marc-Andre Fleury. The American netminder tried to fire the puck to a teammate only to have it hit Bartschi and fall to his feet for an easy goal. That goal made it 6-3 and set up the final tally of the contest.

The man of the night, Brandon Saad, earned a breakaway and slid the puck between Meile's legs. The 5-point outburst for Saad couldn't come at a better time with cuts coming in the morning.

"I didn't get to play [on Tuesday] so I had a little more energy, felt pretty good and played with some good players so I just got the bounces tonight," Saad told me during our post game chat. I asked him if he thought he'd sleep well tonight.

"Yeah, hopefully," he laughed, "It's still pretty nerve racking, it is for everyone just to see if you made the team but yeah, I feel a little bit more comfortable now." 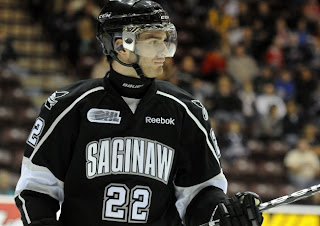 Playing on the top line alongside Zucker and Coyle was a perfect fit for Saad.

"I played with Zucker a few years back and we found chemistry pretty quick and Coyle's a great player so we fit in well together."

With a 6-3 loss to the Russians on Tuesday and a 7-3 victory over Switzerland, a team they should expect to beat, I asked Saad what he had learned about the team over the course of the two games.

"I think it's about our bounce back and the character of the team," he said, "It was a tough loss last night, we got back late, but we came here with a good attitude today and stayed focused and that got us the big win here today."

I put the same question to coach Dean Blais.

"It's the way the tournament is going to be; a lot of times you've got games back to back and if you should happen to lose you have to recover and I thought the guys competed hard," said the University of Nebraska-Omaha bench boss, "Last night they were upset. We could tell from the time that we left Red Deer that we lost to the Russians so I was glad that we came back tonight and that Switzerland gave us a good game." 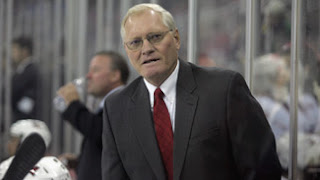 When I had visited the practice on Monday, coach Blais told me that nobody had played their way off of the team. Since then defenceman Seth Jones hurt his shoulder (dislocated or separated, no one is confirming which) and Justin Faulk was confirmed as unavailable. I asked coach Blais if by now, on the eve of the final cuts, had players indeed played their way off of the WJC roster.

"I think it's more about the guys that we're going to choose deserve to be here," explained the coach, "I don't think that we really had a weak candidate. Campbell and Gibson are both quality goaltenders and then you build on out from your goaltending. It hurt, obviously, not to have Justin Faulk here but we moved on but to now lose Seth Jones means we've lost another good defenceman."

"The guys that will represent the United States will deserve it and the other guys that were here for the camp... it's a shame to let them go."

- USA has to trim one defenceman from the remaining 8 healthy bodies. It's impossible for me to say for certain after seeing one practice and one game but I get the impression that it probably comes down to Austin Levi (CAR) of the Plymouth Whalers and St. Cloud blueliner Kevin Gravel (LA).

- Again, just guessing, but after conversing with two different USA followers that I respect a lot, I'm thinking that Shane Prince, Brian Ferland and Jon Gaudreau are on the outside looking in. That still leaves one too many and that will depend on Bjugstad. If he's 100% (or close enough to it) then he stays and either Josh Archibald or Austin Watson may lose out.

- Players I was impressed with on Wednesday were Zucker, Czarnik, Saad, Tynan, Arnold and Brickley up front. Trouba and Clendening caught my eye the most for the rearguards but that's not always an indication of which defencemen played the best. I like them both though.
Posted by Guy Flaming @ 3:06 AM