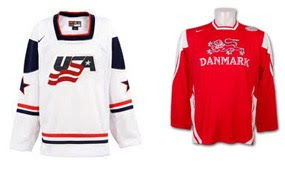 If hockey was a 20 minute game then Denmark would have been please but USA built on a 3-2 1st period lead and trounced the European underdog by an 11-3 final score. The Danes kept it interesting for a period but couldn't keep up with the bigger, faster and more talented Americans who eventually won the game on cruise control.

Game story and post game comments from players and head coach Dean Blais after the jump.


Charlie Coyle was named player of the game for USA based on his hat trick and physically dominating play. The former Boston University Terrier showed Saint John fans what they could expect to see in a game where he scored just 23 seconds in, added two more, should have scored two more and was laying the body as much as he could.

USA's top line of Coyle, Jason Zucker and Brandon Saad were very effective all night long against the Danes and finished with a combined 7 points. 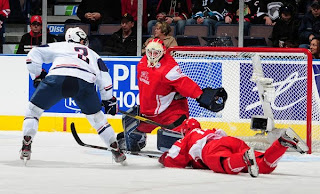 There were two bright spots for Denmark on this night; the two goal performance from Mathias Bau-Hansen and the first period performance of netminder Sebastien Feuk. Feuk stoned Coyle twice in the period including the stellar glove save above that will surely be in the highlight reel for the tournament let alone for this lone game.

Unfortunately for Denmark, most of their highlights came in the opening period and Feuk was given the hook midway through the contest with the score 7-2.

Still, USA didn't let up and continued to press adding 4 more goals on the night. Some would suggest that it was running up the score on a much weaker team while others would contend that you have to show your opponent respect and recognize the potential to come back. I asked several players about that after the game including Coyle.

"We can't get sloppy though or anything like that because we need to carry that over to the next game," he said.

Nick Bjugstad, off the injured list, also commented on walking that fine line.

"This is a prestigious tournament and you don't really want to embarrass anyone but they played hard and they're a good team but our team has a lot of offence which is good for us."

The Golden Gopher played his first hockey in a couple of weeks after resting a sore shoulder through the exhibition schedule. Bjugstad commented on knocking off some early rust.

"Getting into that game situation is a little different than practicing so it was nice to get the contact going," the Gopher sophomore said, "Hopefully I can keep it rolling through the tournament."

Head coach Dean Blais wasn't even sure if goals for and against could come into play (goal differential does matter) and seemed to try and avoid the question at first.

"I thought in the first period our guys looked a little bit nervous which we kind of expected and they stayed together and didn't panic or anything and then we had a good second period," he said, "It's tough when you're up 9-2 going into the third period."

I repeated the question and the veteran coach opened up only slightly.

"We tried some different things, it's not like we tried to get to 15 or anything, you're not our their point hunting and that's what I said [on the bench] 'don't be selfish, get the puck in, get the puck out, work on our transition game and not get run down'," said Blais, "We played four lines and seven defencemen pretty much through the whole game."

Denmark's three goals all came with the man advantage. Coach Blais admitted that despite the lopsided win, clearly their penalty killing is something that still needs attention.

"Oh yeah, [assistant coach] Scott Sandelin's not too happy, he kinda controls the penalty kill and he definitely wasn't happy," said Blais, "Your best penalty killer is your goaltender and I'm sure Jack [Campbell] says the same thing."

Out of curiosity, I asked the coach if he considered playing John Gibson for the third period just to get him into some tournament action.

"No, John's going to get his playing time," the coach stated, "It's a bit different where Andy Iles was Jack's back up last year; John Gibson is for real and has been real good all the way through. He was OK in Lake Placid but since we've been together he's been really good here." 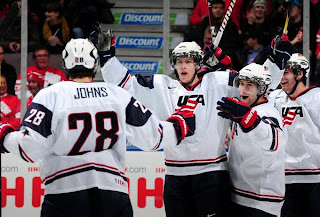 Coyle, who had scored just three goals all year at BU managed to equal the feat in just one tournament game. Jokingly, I asked coach Blais if he was surprised by the offensive outburst.

"Well Jack Parker's got to use him better!" Blais quipped right back, "No, he's a good hockey player and he had a good tournament last year and some media outlets have him as a player to watch. He's one of the guys that has to be a key guy."

"I guess at BU I am (was) more of a defensive guy that could contribute and score as well but it just so happened that the puck went off my stick and into the net today," Coyle explained, "My linemates made it easier for me, I was just at the end of all the plays. It gets your confidence up but I just want that to carry over to the next game and keep working hard."

Denmark will square off against the Czech Republic on Tuesday while USA's next meeting is with the 0-1 Finland entry on Wednesday.
Posted by Guy Flaming @ 6:00 AM