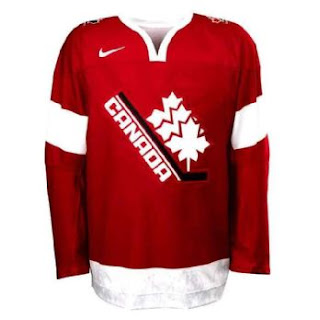 Don Hay is still perfect as a Canadian coach in Red Deer. Hay who guided Canada to it's first perfect tournament in winging gold in the 1995 event watched his troops skate the Swiss into the ice Thursday night at the Enmax Centrium. The final score was 7-1, the final shots were 51-18.


Canada's most productive line was the trio of Freddie Hamilton, Jaden Schwartz and Mark Stone who combined for 7 points. Devante Smith-Pelly was all over the ice, picking up points and unnerving the Swiss all game long and Don Hay noticed his opponent checking out the Anahiem Duck in warm up. Dougie Hamilton was excellent in both ends of the night. 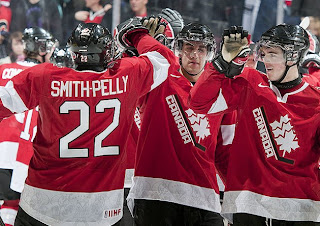 Canada's power play clicked twice, but at times tried to get to cute, especially down low. Smith-Pelly scored on the power play with a rocket shot from around the top of the circles and Hay wants to see more of that starting Friday against Sweden in the team's final tune up. Here's as sample of some of the post game chatter.

"We have to establish more of a shot, right now we're to much on the permitter, we have to get inside a little more"

"It's only the second game but everyone wants to get one. Our line was creating chances. I think it's a feeling out process and whatever role we're put in we gotta be up for the test."

"It feels great...it was a great game I was excited to play, sure it's tough to come back when you didn't play for 6 weeks but the foot feels great. It wasn't my best game but it's nice to get some plays I did before and get it back."

Jaden Schwartz on being named captain and playing the point on the pp (he's on the half wall at Colorado College.)

"It's a huge honour and it's pretty special looking at all the players and coaches that have gone through Hockey Canada."

"It's a little different, something you have to get used to. I played a little bit with Canada before I got hurt." 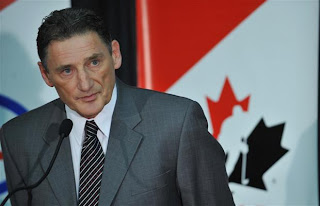 Hay on Schwartz being Captain

"He's a mature young man and he draws people to him. He makes really good decisions. The guys look at him as a guy with experience and composure and that's important in this tournament."

Hay on his goalies

"We have a plan what we want to do, Mark is the guy we want to start against Finland on the 26th and then we'll continue to move ahead as we see fit."

Howden on returning to line up after training camp concussion, was he worried about taking a hit

"It's tough to get back up to speed in one game but I felt good and it's definitely a good progression step."

"I'm confident, I took a few bumps out there and it felt good. I knew coming in I wouldn't be hesitant because that's when you don't play well."

Swiss goaltender Tim Wolf on facing Canada (through a translator)

"He thinks it was a very positive experience for himself, but it was also a wake up call to actually see when the competition begins."

Wolf was the best Swiss player in my opinion.

Canada takes on Sweden Friday night in Edmonton in it's final tune up game before the games begin for real on Boxing Day.
Posted by Dean Millard @ 9:50 PM