Canada 2-0 After Blanking the Czech Republic 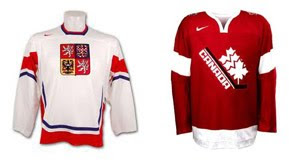 Mark Stone is still red hot, the secondary scoring has arrived and Scott Wedgewood has staked a pretty good claim to be the go-to goalie in net. All in all, it was a pretty solid night for Canada as they improved to 2-0 thanks to a 5-0 shutout over the Czech Republic.


It was another quick start for the host team and once again it was a familiar player lighting the lamp. Mark Stone scored his fourth goal of the event just five minutes into the contest sending the capacity crowd into a frenzy. 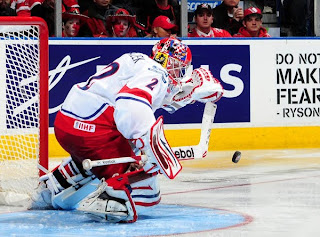 Canada had several chances to build on that lead in the first period but Czech netminder Petr Mrazek (DET) made some absolutely stellar saves to keep his team alive. The period closed out with a penalty shot for Canada but Mrazek bested Stone, a bit of a surprise choice, and then celebrated the save with an animated fist pump.

After the game the Czech keeper, named his team's Player of the Game, explained his actions which some felt motivate Canada on for the rest of the game.

The goalie was roundly booed by the fans who didn't like the showboating from the Czech keeper but that didn't surprise Mrazek at all.

I asked Canadian forward Mark Scheifele (WPG) what he and his teammates thought about it at the time.

"It maybe gave me a little energy to get back at him," he admitted, "I know a lot of the guys were kind of mad about that so it was good to beat him for a few and especially to get the win."

Canada scored twice in the second period with Ryan Strome and Brett Connolly doing the damage. Connolly's goal was a terrific display of eye/hand coordination as he shot, went to the net chasing a rebound, jumped over Mrazek's outstretched leg and tapped the loose puck across the line in one motion.

The third period was punctuated by a pair of goals from Scheifele, his first two of the event including the exhibition games. Head coach Don Hay said afterward that he hopes it's just the start of things to come for the Jets prospect.

"I thought it was great that Mark was able to get the goals, he was in front of the net and in the area that we thought we had to get to to have success and score goals," the coach said, "I think when a goal scorer is not scorer and then he comes out and scores a couple goals, that's a shot to his confidence and hopefully he'll take that and get better as we move on."

Hay also explained why he opted to go with Mark Stone in the penalty shot as opposed to a more noted shootout scorer like Ryan Strome or Brett Connolly.

"Mark's been our best shootout player throughout the camp," said Hay, "We've had a lot of shootouts in the selection camp and in Banff we did that a lot. He seemed to go in and shoot and then he decided to deke tonight so... it's his decision. We just thought he was the hottest player on the ice at that time."

There were a lot of penalties called during the game, both sides had 5-on-3 chances but only Canada was able to capitalize. After the game both coaches said they needed to play with more discipline for the rest of the tournament. 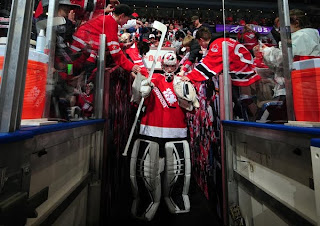 The big question moving forward for Canada is which goaltender Hay will lean on at crunch time. It stands to reason that Mark Visentin will start tomorrow but Wedgewood seems to provide a greater air of confidence, at least from a fan's perspective, when he is in the net. Hay wouldn't tip his hand at all but speaking with a number of colleagues, we all get the sense that it will be the Plymouth goalie in net on New Year's Eve and perhaps Visentin's last action will be Thursday against Denmark.

"I like both of them, they both have played very well," Hay stated, "Where I'm going with it I think you'll have to come to the game tomorrow and find out because I'm not going to tell anybody."

The Player of the Game for Canada was Freddie Hamilton who has two assists so far in the tournament but is making a name for himself based more on his ability to shutdown the opposition. I asked the Niagara IceDog if it's been an easy transition for him to make to go from his role as a point producer in the OHL to defensive specialist at the WJC.

"Yeah it was I think easy for me," he said without a hint of an inflated ego, "Really all I wanted to do at first was make the team and I thought the best way i could do that was with my versatility in being able to put up points and play a defensive role. Now really all I want to do is win the gold medal so I think the best way we're going to do that for me is in that defensive role so that some of the more offensive guys that can really put the puck in the net doing that so, I'm definitely fine with that."

Canada's next game comes Thursday night against Denmark. The Czech Republic will try and regroup before their game on Friday against the United States.
Posted by Guy Flaming @ 2:24 AM