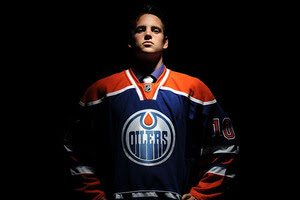 It is being reported by media in the QMJHL that Acadie-Bathurst defenceman Jeremie Blain has received a 2-game suspension for his actions during a 3-1 loss to Shawinigan on Friday night.

Willy Palov from the Halifax Chronicle-Herald referenced the incident on Twitter this evening by saying the ban has been given to Blain "for directing inappropriate remarks towards Shawinigan's Jonathan Racine. Racine is black."

Racine was a 3rd round pick by the Florida Panthers in 2011. Blain became property of the Edmonton Oilers in 2010 after they used a 4th round pick to select him.
Posted by Guy Flaming @ 4:28 PM