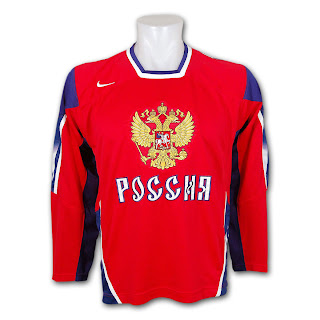 Continuing our look at each team taking part in the World Junior Championship we move from Finland earlier today to the defending champions from Russia.

1 - Which team will show up? Last year the Russians showed incredible resilience bouncing back from a 3 goal deficit in the 3rd period against Canada to win gold. In fact the team came back several times during the tournament. In 2010 the team imploded and struggled to a 6th place finish. Nikita Filatov was the captain that year, for a while before he was stripped of the C and told TPS that the team basically quit on the coach. This year's club is very skilled up front and is like a shark tasting blood...they want more. 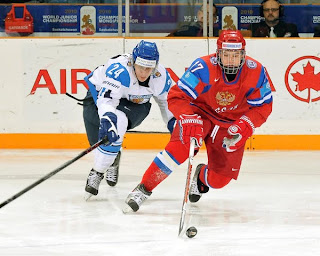 2 - Kuznetsov, Yakupov or Grigorenko? There is so much skill on this team you have to wonder if they will be led by one player in particular. Yevgeny Kuznetsov was the guy who sparked the comebacks last year and will be the captain of this squad. The Capitals first rounder had 11 points in 7 games last year. But Nail Yakupov and Mikael Grigorenko will be vying for some of that top end ice time to, as well as trying to impress scouts in preparation for the 2012 NHL draft. Putting all 3 on the power play could be deadly for the opposition.

3 -Experience - Depending on which goaltender the Russians leave off the roster they could have just one 17 year old on the roster. In fact they could have up to 17 nineteen year olds. They also have back with them head coach Valeri Bragin who worked magic with last year's gold medal winning team.

Who will start in net for the Russians? Andrei Makarov told TPS weeks ago he was already on the team. If that's accurate it leaves youngster Andrei Vasilevski and 19 year old Sergei Kostenko to battle it out for the other job. Vasilevski was brilliant in beating the U.S in pre tournament play.

Predictions: While they are ridiculously skilled, there is just something about this year's Russian team that has me worried. I have them losing to Finland in the Bronze medal game.
Posted by Dean Millard @ 2:00 PM