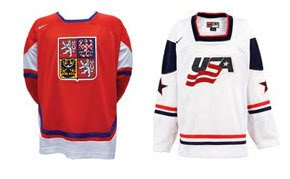 Petr Mrazek's amazing 52-save performance helped the Czech Republic deliver a 5-2 punch that has all but eliminated the United States from the 2012 World Junior Championship.

The Americans will need a highly unlikely Denmark upset of Finland this evening just to stay in the tournament beyond tonight and then will need to defeat Canada tomorrow to avoid relegation.


In what was the most exciting Pool B game of the event thus far, the Czechs overcame 37 minutes of penalties, including a stretch of almost 11 minutes of shorthanded play in the first period, and scored timely goals to earn the victory. 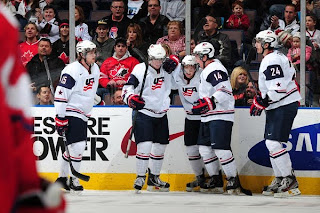 The game opened with the Czechs on the attack but Petr Straka's aggressive hit on defenceman Derek Forbort knocked the American out of the game and led to a 5-minute major and game misconduct for himself. USA capitalized during the major, T.J. Tynan (CLB) converted an exceptional centering pass from J.T. Miller (NYR).

However, the power play for USA went cold after that despite a double-minor at the end of the period that gave them four consecutive minutes with the man advantage.

Tomas Filippi scored his first of two goals on the night to get the Czechs right back on even ground.

The shots after the first period were lopsided 18-6 because of the extended power play time awarded to USA but in reality, the times spent 5-on-5 were equal between the two teams.

The stalemate was broken by Bill Arnold (CGY), again on an American power play, who was in perfect position to grab a rebound and snap it behind Mrazek.

Once again the Czechs responded. Tynan, who had been playing a strong game to this point, gift wrapped a turnover to 2012 draft eligible Tomas Hertl in the slot who took three strides then lifted a backhand over the glove of netminder Jack Campbell.

The third period saw the two teams go back and forth with neither able to get the go ahead goal. Then, Josh Archibald was hauled down on a partial breakaway and was awarded a penalty shot. U.S. coach Dean Blais appeared to ask the officials if they could use any shooter although after the game he claimed that the question was whether they could opt to take a power play instead. Either way, the answer from the referee was no so the pivotal moment of the game was on the stick of Archibald.

At the other end of the ice, Mrazek had already stopped one penalty shot during the tournament (against Mark Stone of Canada) and as he did in that game, made no mistake on Archibald. The celebratory fist pump made another appearance too although this time the Canadian crowd had no problem with it.

"I don't want to say something wrong about the referees of something but I don't think it was that bad for a penalty shot," Mrazek commented after the game. The Americans, like the Canadians a game earlier, didn't appreciate the fist pump but Mrazek didn't sugar coat his indifference. 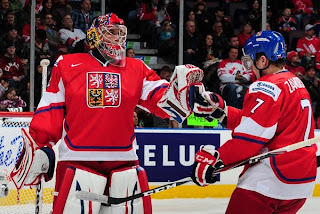 "Well I don't care about the U.S. team and if they don't like my celebrations," he said, "The fans didn't like the Americans today and if I did some celebration then the Canadian fans would stand up and enjoy it so I was happy with that."

USA turned up their attack and controlled play in the Czech zone for the next 60 seconds, peppering Mrazek with shots but they couldn't solve the Ottawa 67's goalie. Then, on a rush the other way, Petr Holik drove to the net looking for a rebound, got it and lifted it over an outstretched Campbell.

The Americans continued to press but were turned away time after time by Mrazek. Another odd-man rush led to Filippi's second of the night, a 2-on-1 pass from teammate Jiri Sekac that Filippi slapped past Campbell.

With the score now 4-2, Dean Blais called for timeout and pulled his netminder, nearly a full three minutes remaining on the scoreboard.

In fact, Mrazek came closer to scoring than the Americans did as he grabbed a dump in and launched it the full length of the ice only to see it glide wide by about a foot. It's not the first time the keeper has tried to score.

"I had a chance last year against London in Ottawa but today was closer," he smiled, "At center ice I [thought] it would go in but it went for icing but no worries, it was an important win."

The sold out Rexall crowd was nearly going berserk and then let loose when Holik was able to score on the empty net to salt away the victory and basically bury USA.

After the game it was obviously two very different stories; the Czechs spoke about a proud moment for their country while team USA was devastated by the loss and what the position they now find themselves in.

"It's a really positive thing for Czech hockey, there have been a lot of phone calls from back home already," said Assistant coach Jiri Fischer, "People back home are watching and the President is very happy."

The star of the game, but somehow not the Player of the Game, was Mrazek who said it was the best game he'd ever played but made the point that the Czechs hadn't won anything yet so it's too early to party. 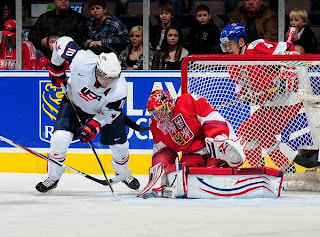 "The tournament's not finished so I can't feel like a hero," said the goalie, "We have a game tomorrow and then the quarter final. We can say something after the tournament."

"He was good, I thought he was lucky and you need a little bit of have both but he was in the right place at the right time," said the coach who made it clear that he took no issue with Mrazek's exuberant celebrations, "That's OK. Hockey's an emotional game and when you have a good game like he did, he celebrated the way he thought."

Blais said the downfall for his side was coughing the puck up at the wrong time.

"Almost every goal they scored... we had the puck and then turned it over."

The coach was asked how he and the team will approach the now meaningless game against Canada on New Year's Eve.

"One word" pride," said Blais, "Even though you're nicked up you have to pull on the skates and be ready for tomorrow. emotionally it's not going to be easy of course when you know that no matter how you play you won't have the chance to win a medal and that's why we're here."

Forward Jason Zucker flat out guaranteed that his squad would beat Canada and Blais backed up his captain.

"You have no chance if you don't believe it," said the coach.

The Czech Republic will face Finland in the early game tomorrow, the winner will claim the second seed from Pool B and the loser will finish 3rd. USA will play Canada with nothing on the line except bragging rights, and then play Latvia on Monday in the first part of the relegation round.
Posted by Guy Flaming @ 6:54 PM