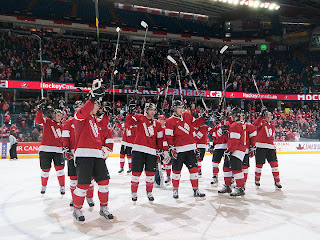 Team Canada wasn't planning an on ice work out Friday so who knows if the lines will stay the same as they were against Switzerland when they take on Sweden at Rexall Place tonight. There might be some tinkering, especially with Don Hay and company working an extra forward and defenceman through the line up. Who knows maybe they catch lightning in a bottle while cycling through the 13th forward.

So for what it's worth here are last night's line combinations, which were shuffled up as the game went on.


The Dmen were kind of all over the place, but the duo of Dougie Hamilton and Ryan Murray could be very good, as well as Brandon Gormley and Scott Harrington, but I think they all teamed up at one point vs. the Swiss.

This was Canada's most consistent line in my opinion. Jaden Schwartz made a few brilliant passes including one that led to a goal. The captain controlled the play then slipped it to Mark Stone who made a deft little drop pass for Freddie Hamilton who slid it past Tim Wolf. Earlier in the game it was Wolf who robbed Hamilton point blank. The Canadian trio was at it again when Hamilton's hot shot created a generous rebound that Mark Stone gobbled up and went high in a hurry on Wolf. They were dangerous all night and combined for 7 points.

This line started together but it was thrown in the blender as the game wore on. Strome teamed up with Micahel Bournival in the 3rd and scored his first goal of pre tournament action. There seemed to be some concern with the Islanders draft pick's lack of production through camp and the first pre tournament game vs. Finland, but he said afterwards he wasn't feeling it. Canada will need the centre who scored 106 points last season to be an offensive contributor. Meanwhile Huberdeau was playing his first game in 6 weeks and while there might be concerns over his previously broken foot he showed his hands are just fine. Huberdeau thought there was some rust, but it wasn't there when he made a deft little back hand cross crease pass to Tanner Pearson. The Florida Panther prospect started with the puck on the far side of the net before making a wrap around pass to Pearson.

Jenner scored what proved to the be the game winner in the first period on a play that really impressed me. First of all Ryan Murray perfected a pinch play to keep Canadian possession of the puck. Tanner Pearson made a nifty pass in front but Brett Connolly's shot was high. it came off the glass right to Jenner who ripped it past Tim Wolf, so hard that not everyone thought it was in...especially Jenner. The Oshawa General raced after the puck that was now in the neutral zone and fired it in for good measure. In the end the first one counted.

They didn't get on the scoresheet with a goal or penalty but the trio had some chances. It was good to see Howden taking some bumps out there, and he said post game he felt good during the game.

Worked through the line up in the first, seemed to get more ice time as the game wore on, particularly on special teams where he was an effective penalty killer. He grabbed the puck on a scrum draw and fired it short side shelf off the cross bar. Aside from his solid work on Strome's goal, he picked a Swiss damn's pocket to feed Quinton Howden for a scoring chance.

Really skilled teams sometimes have a tendency to get to cute on the power play. Canada was guilty of that a little bit against the Swiss. It's good every once in a while to look for the down low cross crease pass and it did work at times, but if the opposition is going to give you room to walk in and rip a shot, do it. That's what Smith-Pelly did going top shelf on Wolf to open the scoring. It's something Don Hay said post game that he wanted to see more on the power play and I agree.

Smith-Pelly scored Canada's 2nd ppg as well, this time a Brandon Gormley shot hit Mark Stone in front who then deftly slipped it 6 feet away to a wide open Smith-Pelly. Stone has great power play potential, as he takes up a lot of room and has soft hands.

Both units were very good with Wedgewood making a few very good saves, his best with the glove on Christoph Bertschy just as a man advantage expired.

Scott Wedgewood was fine in net, but Hay said afterwards the plan is to start Mark Visentin on Boxing Day against Finland. Wedgewood stopped 17 of 18 shots he faced and the one that got passed him was thanks to Samuel Walser being left alone in front.
Posted by Dean Millard @ 10:00 AM