Whatever Happened to Czech Hockey?

"Czech junior hockey is, I think, worse and worse every year... It's not on a high level."

That comment came to us on Saturday morning from a CHL goaltender hoping to represent the Czech republic later this month at the 2012 World Junior Championship. It was blunt and highly critical but perhaps most importantly... it's not wrong.

The Czech Republic has not finished with a medal at a World Junior Championship since 2005 in Grand Forks where they earned a bronze. A huge drop off from their success earlier in the decade where they captured back to back gold medals (2000 and 2001).

Over the last couple of years TPS has touched on the subject with a few Czech players to get a sense of what they think has happened to their national program. 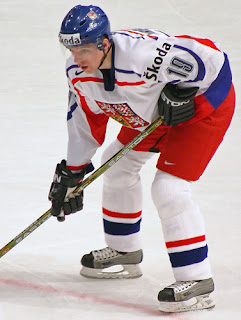 Last year, a story from the Czech Republic linked the struggles of the nation's hockey development to a lack of financial backing. That could obviously lead to an inability to attract and keep top quality coaching and with that, development suffers.

Development is a prime reason why so many Czech players can be found playing junior hockey in the Canadian Hockey League. Scores of current NHL players spent their late teenaged years playing the QMJHL, the OHL and the WHL and all of them cite developement and exposure to pro scouts as reasons why.

One such player is Radim Vrbata (top left) who spent two years as a member of the Hull Olympiques in the late 1990's.

"At that time I was like 16, playing on the national team and my agent he was asking me if I would go to play junior in Canada," said Vrbata. "It was a good idea because it was a good chance to play in Canada and get drafted to the NHL. It worked out so I'm glad that I went there."

More recently, Jakub Voracek (below) saw the CHL as a means to further his development but knows that it isn't the right fit for every player.

"It was the best thing, I'm very happy with my decision," he said, "I played two years [in Halifax] and they were two of the best years of my life." 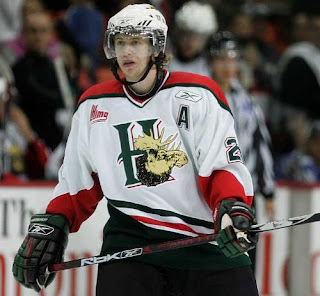 "Some guys back home think it's easy to play in the CHL but you've got to make a smart decision if you want to do that and if you go there you have to be ready because it's tough, it's not easy," Voracek advised, "Some guys think it's easy but it's not and it's worse for [those guys] to come over here. But if you are ready for that, mentally and physically, then I think you can become a better player."

Red Deer Rebels netminder Patrik Bartosak was a guest on The Pipeline Show this past Saturday morning and confirmed that his arrival in the WHL this year was predicated largely on the fact that he went undrafted last season.

"Yeah of course. My agent and the scouts in the Czech Republic told me that I had no chance of being drafted last year," said the goalie, "They told me to come to Canada and play CHL so I asked my agent if he could figure out something. That was the biggest reason why I came here; because I want to be drafted and I want to play in the NHL."

And so far, no regrets.

"I love it here, I love Canada and the style of hockey, the attitude of the people around hockey here," said Bartosak, "It's much more professional than in Czech Republic where junior hockey is not considered a big level or something. I'm very happy here."

That lack of enthusiasm back home for junior hockey is apparent when the U20 WJC is held there and viewers can routinely see arenas sitting half empty. 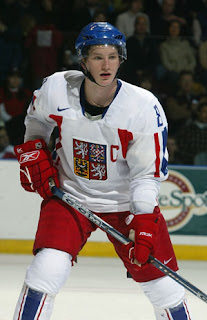 Ladislav Smid (right), a three-time U20 team member for the Czech Republic, talked about that a couple of years ago when I spoke with him about the differences between junior hockey in Canada and in his homeland.

"I remember the U20 in Pardubice [in 2002]," said Smid, "The arena held about 12,000 people but every night there was maybe 6000-7000 people. It's not that big in Czech Republic, I don't know why. Maybe it's junior hockey, they don't care about that, they only like the senior national team. Maybe that's the reason."

It was a similar response when I asked Vrbata if the regular season fan support back home was the same as he experienced in the QMJHL.

"No, not at all," he said, "In Canada you can play in front of 10,000 people but in Czech it's more like just parents and friends so it's totally different."

There is no debate that the once top caliber Czech teams have lost their international standing. No longer are they considered one of the top nations as the gap between them and Canada, Sweden, Russia and the United States has continually widened over the last several years.

The question is why.

"I don't think anybody knows why," said Voracek during an interview with TPS a couple of years ago, "It's happened to us over the last four or five years at the World Juniors (U20) the U18... everything." 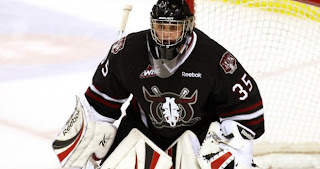 Bartosak (above) didn't sugar coat his feelings at all when we asked him on Saturday if he could explain his country's decline in the hockey world.

And maybe that is the problem right there - the country's top players don't play there. Instead, they come to the CHL where they know they will better their own situation. I asked Voracek if he thought his country would fair better if the Czech players stayed home and played together all season.

"Obviously it would be better but I came here for a reason," he said. "I didn't think that I could play 15-17 minutes as as 17-year-old in a men's league. That was the year of the draft for me at that was a very important call. There were other guys than me; [Michael] Frolik stayed there one more year in Czech for Kladno and he played on the fourth line almost all year. It's everybody's decision but if the teams want to keep us there then they'd have to give us a chance [to play], that's what I think."

So not only is the Czech Republic unable to build much of a domestic program because its top young players are playing in North America but we should also remember that they lost a large chunk of their player pool in 1993. That was the year that Czechoslovakia split creating the Czech Republic and Slovakia.

Prior to that political separation, Czechoslovakia had claimed 11 medals at the World Junior Championship. Post split, just three. For argument's sake, consider how The United States would perform if USA Hockey suddenly had to rely strictly on players from east of the Great Lakes? 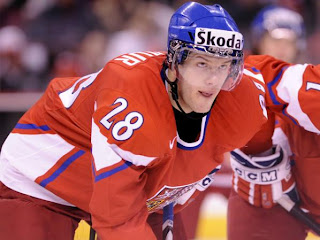 No longer are Czech teams heading into the World Junior Championship feeling like they can compete for the gold medal. I asked former Edmonton Oil Kings forward Tomas Vincour (above) about that one day and he explained that cracking the top 4 is about as much as the Czech club can realistically hope for.

Winning a quarter final game puts you into the semi-finals, meaning that somewhere along the way you have finished ahead of one of the Big Four. Slovakia claimed fourth in 2009, Switzerland did it in 2010 and back in 2006 it was Finland.

I asked Voracek what he thought the long term solution might be but although he couldn't offer up and actual suggestions, he did reiterate that the situation is dire.

"It's going to be a long process I think," he said, "I don't remember the last time we brought the gold medal home from the World Junior championship. Every year it is worse and worse. When I played we had two 5th place finishes."

"I think the junior league in Czech, the triple 'A' and the system there is not as good as [in Canada] and we have to do something about it."

How about actually taking the best players for the team?

Petr Mrazek was openly critical of the Czech Hockey Federation for leaving him off the WJC team last year...because he played in the CHL.

The Czech Republic seems be one of the only nations left with a serious bias (or hatred) towards players who leave home to play overseas. This year, they'll probably leave Mrazek off again (one of the better goaltenders in the OHL). It also came out that Kitchener Rangers forward and potential draft stud Radek Faksa was also out of the running because he came to play in the OHL.

If they want to win at the WJC's...it's as simple as taking the best players.

We were told by Bartosak in the interview (see link) that Mrazek was cleared to play now.

Interesting to hear about Faksa, I guess we'll see how this plays out.

Just listened to the interview. Interesting about Mrazek. And a good choice for the Czech's (obviously).

Regarding Faksa, here's a link confirming it. The news came out about a week ago.

Matej Stransky (Saskatoon) told me he's "not allowed" to play right now too.

Shooting themselves in the foot a bit.