Denmark No Contest for Canada 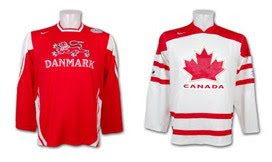 From the beginning of the 2012 World Junior Championship, especially the Pool B portion in Edmonton, much of the focus has been looking ahead to New Year's Eve. The much anticipated collision between the United States and Canada is nearly here and Canada is a near flawless 3-0 after turning Denmark into a speed bump on their way to December 31st. 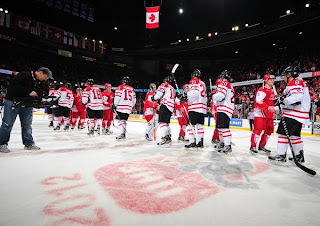 Thursday's contest was anything but; Canada dominated Denmark in every facet of the game right from the outset. The score after the first period was 4-0, the shots 15-3. By the middle of the second frame it became painful to watch the Canadians skate circles around their opponents, a likeable group of Danes that have become underdog stars over the last few days in Edmonton.

There are those who believe the WJC should be an 8-team tournament with one nation relegated in and out each year. It's hard to argue that Denmark and Latvia, 14-0 losers to Russia, deserve to be playing at this level.

Canada used this game to fine tune some things and hoped not to create any problems while playing against vastly inferior competition. 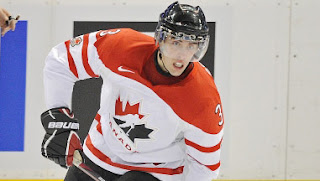 "Sometimes those are the tough games to play but I thought our team did a good job of sticking to the systems and not letting those bad habits creep in," said Brandon Gormley.

"We just tried to stick to the game plan, didn't try too much fancy stuff and just play simple hockey and I think that's what our mindset was going in," said forward Boone Jenner (CLB) after the lopsided win over Denmark.

Now, 3-0 and having allowed only 3 goals against in the tournament, it's fair to ask if they head into New Year's Eve against the Americans having truly been tested.

"We had some good [exhibition] games and round robin games," argued Jenner, "We're going to start focusing on [USA] tonight and tomorrow and hopefully be ready to roll on New Year's Eve... it should be a fun game to play in and a really competitive one."

One aspect of Canada's offensive attack that blossomed against Denmark was the contribution made from the blueline. Defenceman Scott Harrington had four points on the night and Gormley scored twice, the Moncton Wildcats rearguard was named Player of the Game for his effort although he downplayed the honor.

"Personal success comes along with team success and we got the 'W' so that's the main thing," Gormley said before commenting on the play of the rearguards. "It was a big part of our game plan. I thought last game we were getting a lot of shots blocked and not getting pucks to the net. From our standpoint as defencemen it's about getting pucks to the net and letting the forwards do the dirty work down low."

Unlike the games against the Czech Republic and Finland, Don Hay was able to give a lot of players ice time against the Danes. One guy who played more than he had up to now is Edmonton Oil Kings captain Mark Pysyk. I asked him to talk about his limited role with the team and like any good captain, for him the team comes first.

"Everybody wants to play top minutes but in this type of tournament, with team Canada, that's not a big issue for me," Pysyk said, "Any time that I'm out there I'm going to try my best and seize the opportunity. I felt pretty confident playing with Jamie [Oleksiak] tonight so who knows what will happen coming up against the States." 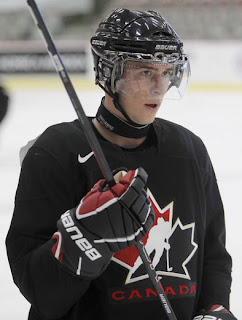 I pressed Pysyk on whether he'd been told to expect a bottom pairing role.

"They haven't said much but I think that's the way it's going to go and I'll be on the third pairing," said Pysyk, "[Ryan] Murray and [Scott] Harrington are the shutdown guys, [Brandon] Gormley and [Dougie] Hamilton are the next guys and it looks like Jamie and I go out whenever, maybe kill some penalties if that's what needs to be done."

I also wanted to know if it's hard to go from being a 25-30 minute guy with the Oil Kings to much less with Canada.

"It's really easy, honest to God," he insisted, saying at times like this the ego goes out the window, "playing for Team Canada is a dream come true. I could be the back up goalie or the stick boy here and honest to God I'd be happy. We're here to win a gold medal and whatever that means, whatever they want from me, that's what I'm going to do."

Fortunately for Pysyk, offensive production isn't one of the things he's expected to provide. He, along with partner Jamie Oleksiak, are now the only two skater on the team to yet record a point in the tournament. I jokingly asked them both whether there might be a side bet between them now to not be the last to hit the score sheet.

"Yeah we saw last night that Wedgewood got a point before we did... I guess maybe we should make a little bet here," said Pysyk. 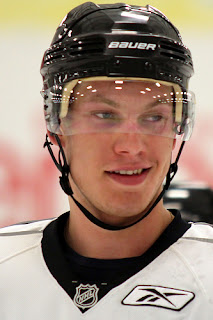 "I'm trying to focus more on my plus/minus and being more of a team player," began Oleksiak, "I don't think we'll have a bet, [Pysyk] has been a great sport about it and I'm not worried about it at all to be honest with you."

That said, Oleksiak did concede that being outscored right now by goalie Scott Wedgewood is problematic.

"Yeah Wedgie... his head's getting a little big," the big defenceman kidded, "I kind of have to remind him a little bit of the regular season where I've scored two on him. That's the big thing I try to throw up there. He's kind of let it go to his head a little bit, we've had a little Twitter battle here so, he's been good about it, he's a fun sport." 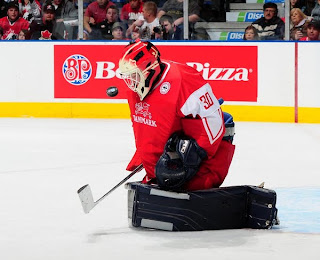 - a funny moment during the post game press conference with the two coaches when Dean Millard asked Denmark coach Todd Bjorkstrand to talk about the play of his netminder so far. Sebastian Feuk, sporting a 9.58 GAA and .803, has been shelled by the opposition thus far but had made some incredible saves along the way.

"He's a free agent," said the coach who seemed to be wearing his agent hat at the same time, "He's looking for a team, he doesn't have a team back in Denmark so... if anyone's interested."

- Michal Bournival was a game time scratch as he battles a flu bug. At times Don Hay called on Nathan Beaulieu to take a few shifts as a forward.

"We asked him if he'd like the opportunity to play forward, he said 'sure', so... I think he gave us some good shifts," said Hay, "Obviously he's not comfortable there but he jumped in and did a good job for us and we really appreciated that."

- Defenceman Jamie Oleksiak, now with Saginaw in the OHL, was asked a ton of questions about playing USA on Saturday, a team he nearly cracked the roster of in 2011. The big blueliner still wears a Northeastern University bracelet earned during the annual Beanpot tournament. Fittingly, Northeastern's colours are red and black so it goes well with his current jersey.

- Forward Mark Stone has scored in all three tournament games so far and also the three exhibition lead up games. He leads the 2012 WJC so far with 6 goals.

Canada is now off until Saturday when they will face the United States in the game everyone has been waiting for. Denmark closes out their round robin with the late game on Friday against Finland.
Posted by Guy Flaming @ 11:32 PM