Edmonton Fans getting the Royal treatment 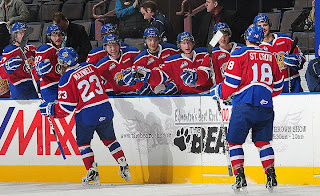 Wow, it must be fun to be an Oil King fan right now.

Edmonton fans - and those across the WHL on Shaw - watched the OK kids run their win streak to an even 10 Wednesday night, doubling up Victoria 6-3. The numbers during the streak are pretty impressive.

-6 straight games with at least 5 goals for

-never more than 3 goals against in one game

Linemates Dylan Wruck and Tyler Maxwell are currently at 12 as far as point streaks, while their winger Michael St. Croix also had a 12 game stretch this season, putting the trio tied for the 3rd longest streaks this season. Laurent Brossoit has varied from steady to spectacular and the crowds are starting to grow at Rexall Place.

The team is fast and fun to watch right now, when they're going full tilt, which hasn't always been the case over the last 10. (Well, the last 3 to be exact). At times the Kings have looked sluggish and lazy, only to ratchet up the intensity and score in bunches. On one hand the coaching staff will be happy that they can turn things on when needed, but taking large gaps of time off during games will cost this team down the road and it's not a habit Derek Laxdal and company will allow for much longer.

The fun will continue for 2 more games before the team heads home for Christmas and then on the road during the World Junior Championship, which means even more great action at Rexall Place. Speaking of Christmas, here's hoping Santa brings the Oil Kings a new goal song. How about something with some pep to it. Use the current song for player intros before the game.


Guy's contribution: I just have to say that finding the Duck Sauce video on YouTube to embed here was the first time I have actually heard this song outside of Rexall Place. An entire song of "ooooweeeee ooooooooweeeee, Barbara Streisand"??? Are you kidding me?

Might I take the liberty and suggest something that actually makes sense to use after a goal scored by a team named Oil KINGS? Just loop the bit from 0:10-:30 and you're set. Sure, it's not a dance song but you can understand the words and hey... they fit the situation. Go figure!

I leave it in Lemmy's hands: