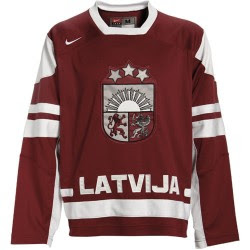 Starting Today and running through till Boxing Day we'll give you a quick look at each team suiting up in the World Junior Hockey Championship. First up is Latvia

1-Zemgus Girginsons-The 2012 draft eligible forward could become the first Latvian taken in the first round of the NHL draft. Most publications have him as a first rounder with some thinking top 10 potential. He was wooed by the Kelowna Rockets of the WHL, but has committed to Vermont in the NCAA and has repeatedly denied any interest in moving west. Currently he's in his second season with Dubuque Fighting Saints of the USHL where he's put up 12 goals and 26 points in just 22 games. As a rookie he netted 49 in 51. 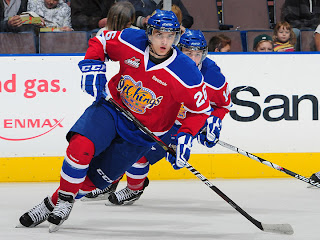 2-Kristians Pelss-The Edmonton Oil Kings forward and Oilers draft pick will likely be the only one to take the pressure off Girginsons. Pelss at times has looked dominant in the WHL and he'll enter the tournament on a hot streak with 9 points in 8 games including a 7 game point streak.

3-Latvian Fans-It's well known that the tiny Baltic country has some of the best fans around when the World Championships are held in Europe. Will they make the trip to Canada for the event? If so they'll be loud and proud for their boys and will be very entertaining. Also watch for Calgary fans to adopt the team as a feel good story.

Teodor Blugers is a 17 year old centre who was born in Riga, Latvia but developed in North America. He's currently in his 3rd season with Shattuck St. Mary's prep school where he's torching things up with 33 points in 20 games. Next year he's set to join Minnesota State University (Mankato). Blugers is also 2012 draft eligible.