U20 Reinforcements Needed for Canada

One defenceman and five forwards. That's the count for players Canada invited to their summer U20 camp in Edmonton who are still playing in the NHL and therefore unlikely to be wearing the maple leaf at the 2012 WJC in Alberta. A couple of others are currently on the shelf with injuries which may be healed in time but may also prove to be a factor before the event.

Regardless, it's apparent that Canada will be on the lookout for guys to invite to their December camp and there are several across the country who are playing their way into consideration.


Erik Gudbranson is now a full time member of the Florida Panthers. The big blueliner is certainly a loss for Canada but thankfully, defence is probably where the most depth can be found right now at the U20 level. 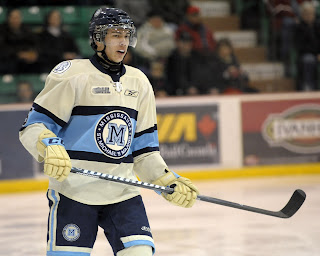 Stuart Percy (TOR) and Ryan Murray (2012) are hurt right now but indications are that both could be back in time for the December camp. Surely Ryan Murray has a place on the team this year, at least before the high ankle sprain, but is it a lock now considering the time off he'll face?

Hockey Canada invited 17 defencemen to the August camp including Dillon Simpson (EDM) who, at this point, I don't expect to be back in December. He's currently pointless at North Dakota and is still one of the youngest players to have gotten the summer invitation. 2013 is probably more realistic for him to crack the final team anyway.

Assuming Murray and Percy are healthy and able to attend, Canada could still look to replace Simpson and Gudbranson but considering they had 12 d-men at the December camp last year, I'm guessing the dozen will come from the other 15 that were in Edmonton. 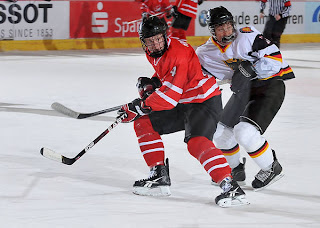 If not, two to keep in mind are both 2012 draft eligible guys from the WHL; Red Deer's Mathew Dumba and Morgan Rielly from Moose Jaw. Both wore national colours this past summer at the Ivan Hlinka tournament and won gold. Dumba was the teams captain while Rielly (above) finished with 4 points in 5 games, a scoring pace he's kept into the WHL's regular season.

1st round draftee Dylan McIlrath (NYR) of the Warriors and 2nd rounder Alex Petrovic (FLA) of the Rebels could also get consideration and better fit as replacements for Gudbranson in terms of being a big body. Either way, pretty good for both Moose Jaw and Red Deer to have a couple guys who could answer the call.

Up front Canada has likely lost the services of Brett Connolly (TBY), Ryan Nugent-Hopkins (EDM), Devante Smith-Pelly (ANH), Sean Couturier (PHI) and Ryan Johansen (CLB). Although it's possible for any of them to be freed up by the NHL club that they play for, it's not very likely. Four of the five were locks to be on the team if available and with the way Smith-Pelly performed in the summer, he had the inside track on another one.

Last year, 24 forwards were invited to the December session which is two less than were given looks this past summer. Assuming it will be 24 again, at least a couple of new players will get a call.

The WHL's leading scorer right now is Kevin Sundher (BUF) of the Victoria Royals. The center has 32 points in 17 games and will be suiting up for the WHL against the Russians in the Subway Super Series so obviously he's on the radar. 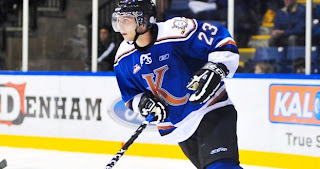 Interestingly, Regina's Jordan Weal (LA), Saskatoon's Josh Nicholls (TOR) and Kootenay's Max Reinhart (CGY) will play in both of the games against Russia. Does that indicate something more significant? All three are in the top 20 of league scoring.

Should Prince Albert's Mark McNeil (CHI) get consideration? It was a minor surprise to some that the big Edmonton native was omitted in August but if Hockey Canada is looking at the performance of players right now, McNeil can't be considered to be carrying a hot stick - he's got 2 points in the last 9 games and is bogged down by a minus-11 rating.

In Ontario, the Barrie Colts have a trio of unheralded players occupying the top five of OHL scoring. One, Tanner Pearson, is of the right age but someone closer to the scene will have to inform me whether he's got what it takes to play for Canada in the WJC. 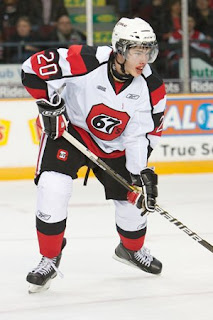 Charles Hudon has 20 points for Chicoutimi right now. The undersized dynamo led Canada in scoring at the Ivan Hlinka tournament with 9 points, nearly twice as many as anyone else on the squad. Might his name be coming up in conversation?

Would Hockey Canada consider inviting any underaged forwards, guys not eligible for until the 2013 NHL Draft. If they did it would be unlikely they'd make the team but considering Sean Monahan (left) is 5th in OHL scoring with 28 points and Nathan MacKinnon is 6th in the QMJHL with 27 points... would it really be that unrealistic to think about it?

Canada has plenty of options and as disappointed as I'm sure the brass is over the players they won't be able to use, I'm sure they'll be excited about the quality on the final roster in December.