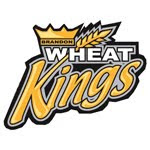 The Brandon Wheat Kings have gone through quite a few changes on and off the ice in the last year. They dealt franchise forward Brayden Schenn at last year's deadline, and this off season watched Kelly McCrimmon step down as Head Coach and hire Cory Clouston to coach the club. But the Wheaties haven't missed a beat early in the season as heading into Thursday nights action they sat a point out of first place in the East Division.


Voice of the Wheat Kings Bruce Luebke joined us Tuesday night to break down the club and told us how the team is adapting to a new bench boss.

"Cory Clouston came in with a reputation as maybe more of a defensive minded coach then an offensive coach as Kelly McCrimmon was referred to over the last 7 seasons but so far so good as far the offence is concerned for the Wheat Kings."

I'll say they lead the league in goals with 23 through 5 games and boast not just the WHL but CHL player of the week in Ottawa Senators prospect Mark Stone. The 19 year old scored 4 times and added 5 helpers in the first 3 games of the year. The hi-lite of the week was a 3 goal-4 point night in a win over rival Saskatoon.

"Basically for the second straight year, playing with some new linemates he's really stepped up and been the offensive leader" Luebke told us before adding that despite finishing tied for 3rd in league scoring (106 points along with Ryan Nugent-Hopkins) Stone is likely still underrated around the league.

"I don't think a lot of fans know how good this guy is and they're going to find out during the course of this season." 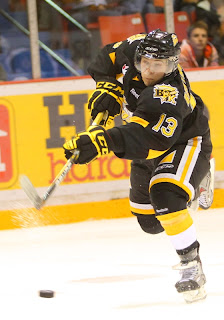 Along with Stone, Brandon is getting some sweet Swiss offence from import Alessio Bertaggia who leads all rookies and imports in scoring with 8 points. If you don't know who Alessio is, you might know him from his other moniker.

Red 23. You see Bertaggia is the player who attended Portland Winterhawks training camp last year, but wasn't on their list. Our good friend Neate Sager from Buzzing the Net has the story if you missed it. As for Bertaggia in a Wheat King uniform?

"Red #23 is looking pretty good in Black and Gold this year" laughed Luebke. "He's not a big guy he's about 5.8 and 165 pounds, but what I've seen so far, and this is always the key for any import coming to play in the Western Hockey League, is he's not shy about contact, in fact to the point where he's initiating contact."

You can hear the entire interview regarding the surging Wheat Kings and Luebke's thoughts on the most recent WHL suspensions and trades by clicking here.