An interesting field in the Calder Chase

It's early in the season but a few freshman have busted out of the gate and are galloping hard around the first corner. There's a few usual suspects and some refreshing surprises, while other pre-season favourites are pacing themselves. The great thing, and let's hope is stays this way all season, is that no player is running away with it already, and a month from now the top of the list could look totally different.

In the top 6, of which all players have at least 6 points you have a first and second overall pick, a 2nd rounder from 3 years ago, a 4 round pick from 2 drafts past, an undrafted collegiate and a 7th round guy from 2005. 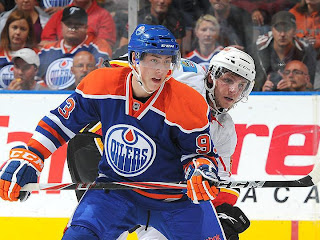 Ryan Nugent-Hopkins leads the way with 9 points and is the only rookie in the top 30 at a point per game pace. He was with the Oilers on route to Colorado Thursday night where he'll play his 10th game against the Avs and the Red Deer Rebels can retire his #9 if they wish because he won't be returning to them. RNH has impressed in almost every aspect, and over time he'll improve his 28 % face-off statistic. So much talk about him during the off season and in training camp was about his vision and it is excellent. But for those who watched in in junior with any consistency, they aren't surprised by his scoring ability. He had a pro level shot while with Red Deer and probably could have been a point per game guy off his line mates putting away his rebounds from goalies who weren't fast enough. From his hat trick to his plus 3 rating to his pair of PPG and one GWG RNH has been 'XLENT'.

Just behind Nugent-Hopkins was my dark horse pick for ROY, Luke Adam of the Buffalo Sabres. He's put up 3 goals and 5 helpers through the Sabres first 9 games. Adam has been streaky so far netting 6 points in the first four, going scoreless in the next 3, then adding a point in each of the swords last 2 games. Buffalo grabbed him in the 2nd round in 2008. He spent 4 years in the QMJHL where he ripped up 90 points in 56 games during his final season. That year also saw him score 8 points in 6 games for Canada at the World Junior Championship. Like his WJC teammate and draft class colleague Jordan Eberle Adam was sent back for his 19 year old year, but unlike Eberle Adam spent most of last season in the AHL. The seasoning has worked and just like his Sabres teammate (also an '08 draft pick) Tyler Ennis Adam was named AHL rookie of the year Ironically it's Ennis' ankle injury that could mean more playing time for Adam.

Sitting even with Adam is Craig Smith from Nashville, their goal and assist totals are exactly the same but Smith is Even with 6 penalties and a pair of power play goals. Their ice time is nearly identical but their road to the NHL is vastly different. Smith was a 4th round pick 3 drafts ago and he's has more points then 83 of the 96 players taken ahead of him. The Wisconsin born Smith was a point machine in High School with a staggering 101 points in 40 games. He wasn't as prolific in his first 2 years with Waterloo of the USHL but during his final year he turned into a power forward point machine finishing 2nd in league scoring with 76 points, a +32 and 108 PIM. Not many kids play a 3rd year in the USHL or Junior A in Canada but it paid off for Smith as he kept the offence going during his two seasons with his home town Wisconsin Badgers. 76 points in 82 games plus a stint with the U.S. World Junior club was enough as Smith signed with the Preds this summer and is hitting all the right notes in Music City. 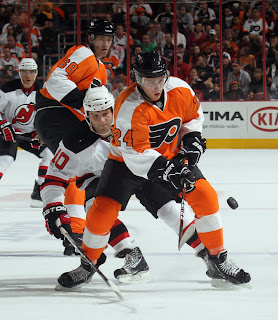 From a mid round pick to an undrafted rookie in Matt Read. He surprised quite a few people when he stuck on the Flyers roster out of training camp, but his 13 points in 11 games with Adirondack late last season should have been something of a foreshadowing. There are guys who were talking about Read before the season, and the son of a military man has made others take notice. He's not the biggest guy at 5.10 185 but he's surrounded by big forwards in Philly so size isn't to much of a concern. What has every body reading about him is his offensive game, in particular a 4 point, +3 night against Ottawa this month in just over 16 minutes. Read played a season of Junior A for the Milton IceHawks and had 68 points in 48 games. He then past the 60 point mark for Des Moines of the USHL. 4 years at Bemidji State University where he finished with 143 points in 147 games. Will Read keep it up or will he slow down and eventually spend some time in the AHL?

The guy drafted right after RNH in Minnesota this past June has 3 less points then his fellow Octagon Hockey client and Avalanche forward Gabriel Landeskog is part of the biggest surprise so far this season, his team's success. The Oilers and Avs drafted 1-2 and are tied for the Northwest Division lead. Landeskog who a lot of scouts compared to Peter Forsberg watched his Swedish idol get his number retired (or just stored in the rafters until he decides to play again I'm not sure) and has tried to lead the Avs the way Foppa did. Whether or not he'll reach the point per game plus pace that Forsberg did in his rookie season or not is still to be decided. Landeskog is playing decent minutes and has taken the 4th most shots in the league. The former captain of the Kitchener Rangers spent 2 seasons in the OHL but an injury kept him out of World Junior play. His 4 goals, 2 assists and plus 2 rating has him on solid ground in the mountain range. 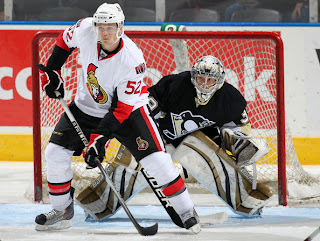 Finally there is Colin Greening who's 6th points has him tied with Landeskog for 5th/6th. 3 goals, 3 assists and while his -6 is ugly, he's a rookie on the youngest team in the league. He's not the youngest though, at 25 Greening has paid his dues and taken advantage of his current opportunity. He's averaging more then 2 minutes with the man advantage and has 3 points so far. Greening was drafted out of Upper Canada College, a private high school in Toronto. The Sens took a flyer on him with the 204th pick of the 2005 draft. From Ontario he flew west for a season with the Nanaimo Clippers of the BCHL. The league was heavily scouted that season as it was Kyle Turris' rookie season and Greening's 62 points caught the attention of Cornell Big Red of the NCAA. In 3 of his 4 seasons the winger either led or sat second in scoring for the Ivy league school. Greening had a taste of the show last year for 24 games but spent the majority of the season in Binghamton winning a Calder Cup. For me Greening is the biggest surprise on this list, and I hope he can stick it out.
Posted by Dean Millard @ 6:00 AM