Rielly Vs. Reinhart at Rexall Place

~
The Edmonton Oil Kings pulled out a 2-1 victory over the Moose Jaw Warriors tonight, dominating the tribe 42-18 on the shot clock and jumping into a 3 way tie for first in the central division.

It was a battle of 2012 first round draft prospects, and former D partners as Morgan Rielly went head to head with Griffin Reinhart in front of a ton of scouts. A number of teams sent their head scouts to watch the 2 rear guards. 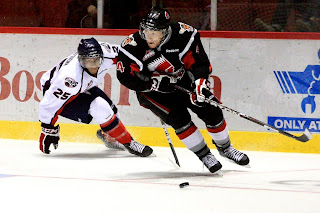 For me Rielly was the better player on this night, which might seem strange when you look at the box score and see that Reinhart scored both the game tying and game winning goals, on similar plays. Both were bullet shots from the point and the gwg came with just 1:32 to play.

Reinhart for me struggled in his own end, turning the puck over and making some risky passes. In the offensive zone he was good, but just a little shaky while protecting his net. The 2 shots that Reinhart made for both goals were perfect and it's scary to think how good Edmonton's power play will be in the next couple of years with him dropping bombs on opponent goaltenders.

Rielly on the other hand was strong on the puck when the OK kids attacked. One play in particular he stayed with TJ Foster who had a full head of steam and forced Foster into the end boards taking away a great scoring chance. You have to be an incredible skater to keep up with Foster when he's at full speed and watching Rielly skate is a pleasure. He showed his wheels on offence as well, making a nice little deke on Rhett Rachinski and then motor up the ice to set up a scoring chance. 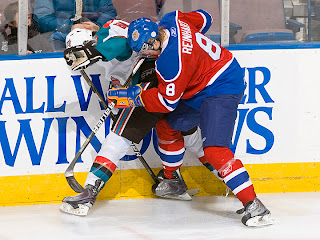 I was impressed with the play of a couple of Oil King rookies, Mason Geertsen and Mitch Moroz who both dropped their gloves. Cody Beach on the other hand disappointed me a little. He was his usual feisty self jawing at Klarc Wilson all night long. However when he had the chance to scrap Wilson, he instead chose the rookie Geertsen as his dance partner. Luke Siemens was also terrific for the Warriors and the only real reason they were able to stay in the game.

Next action for the Kings is Friday night when the Portland Winterhawks come to town and we get to see another match up of 2012 draft prospects in Derrick Pouliot and once again Reinhart. It'll also be a chance to see Joe Morrow for the Hawks. I was told by a scout tonight that 'if you think Reilly is a good skater, wait till Friday night when Joe Morrow is here.' The 18 year old almost made the Pittsburgh Penguins in his first training camp.

Rielly was great, but I still think Reinhart because of his size ends up going first in the draft. Reilly by the way will be a guest of The Pipeline Show this Saturday morning.