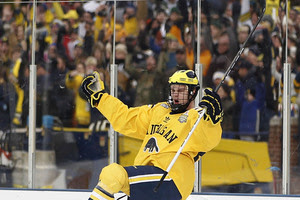 Suspended Michigan defenceman Jon Merrill (NJ) was seen taking in a Plymouth Whalers game recently fueling speculation that he may be entertaining the idea of jumping to the CHL. Yesterday the The Michigan Daily had an update on Merrill's situation with the Wolverines and made mention of the OHL stop.


Head coach Red Berenson suspended the New Jersey Devils prospect 12 games for violating team rules, which could be a variety of things, but said Merrill was free to begin practicing with the Wolverines after a couple of weeks. The player has chosen not to which makes it seem pretty obvious that player and coach are not on the same page.

There are a few possible outcomes to this. First, Merrill and the Wolverines mend fences and he returns to the fold. Second, he chooses to leave the NCAA and joins the Whalers in the OHL. Third, the New Jersey Devils could sign him and send him to their AHL affiliate in Albany. Lastly, the Devils could sign him and then send him to Plymouth as is what happened last year with Toronto prospect Jerry D'Amigo who left RPI to play professionally but ended up in Kitchener.

Without Merrill so far this year, the Wolverines have gone 4-0 and are currently ranked #1.

This is not the first time Merrill has gotten into trouble; he was suspended from the US-NTDP during his draft year for unpublicized conduct away from the rink. Some scouts we talked to during the 2009-10 season said they were "disgusted" by both what he did and his nonchalant attitude about it when it was brought up during the interview process at the 2010 NHL Combine in Toronto.
Posted by Guy Flaming @ 2:04 PM