And just like that the Oil Kings have company on top of the standings after Regina, thanks to 3 goals in the final 5 and a half minutes, skated away with a 6-3 win. Couple that with Saskatoon beating Swift and it's 3 teams with 14 points.

The Pats/Oil Kings game was great, best of the year so far easily. 9 goals on 72 shots, 4 lead changes and 3 times the game was tied. Some big hits and sweet goals. What more could you ask for? 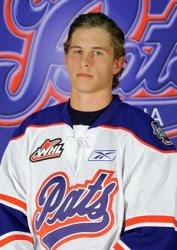 Oilers prospect Brandon Davidson (right) put a bullet of a shot past Laurent Brossoit in the 3rd period and added an empty net goal. Jordan Weal who was drafted 3 rounds ahead of Davidson in 2010 by LA put away the game winner on a rebound from Dryden Hunt, another from the bantam draft class of 2010.

Speaking of the 1995 born players, Morgan Klimchuk didn't disappoint, notching the games opening goal. He didn't look out of place and was out on the club's power play most of the night. 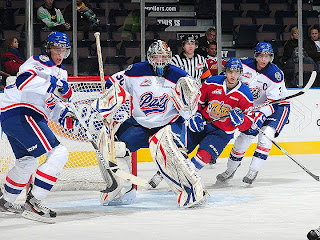 The real story though was between the pipes. Matt Hewitt was brilliant at times in stopping 34 of 37 shots including 16 of the 17 first period shots Edmonton fired at him. Hewitt made a couple of saves on a bang bang play in the first, but his best was robbing Rhett Rachinski point blank, twice. First it was with his left pad on a one timer, and then sprawling to take away the rebound chance as well. 2 of the The undrafted 19 year old certainly impressed the scouts at the game.

The Pats most impressive 2012 draft prospect for me was Czech winger Dominik Volek. He set up one and scored a dandy where he danced his way from the side boards to the high slot and zipped it high glove side on Brossoit.

The next 3 home games for Edmonton will be fun to watch. Moose Jaw with Morgan Reilly (2012), Portland with a boat load of drafted players, and Ryan Murray (2012) in his only visit to Edmonton...until the WJC that is.
Posted by Dean Millard @ 12:16 AM