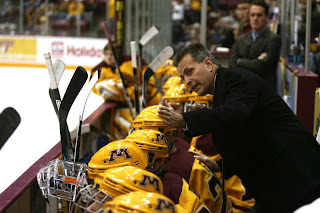 There's been talk about Don Lucia's future at the helm of the Golden Gophers I think since we started our show. Now we can put that to rest as the Don of hockey signed a new 3 year deal to coach the team.

Minnesota is off to a perfect start at 4-0 and are really filling the net, so maybe we won't see another average to poor season like the last 3 for the GG. He'll also get the chance to coach against his son Mario who will play at Notre Dame next season.

USCHO.COM has the details.
Posted by Dean Millard @ 4:30 AM