The Edmonton Oilers have three players currently skating in the ECHL, all three of them still possessing junior eligibility. For an organization that has mentioned several times about their desire to have contract wiggle room, it's interesting to see them not use an obvious out in order to better manage the number that they are carrying this year.

It's more confusing still when you consider the impact and development two of the three players in question could have if they were back in the CHL. 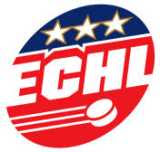 The first question you'll have to ask yourself is whether you think practicing and playing a regular shift in the ECHL, with professionals, is better for a 20-year-old's development than being on the top line or the starting netminder for a junior team that could play well into May.

Without question I am a believer in the latter and think that young players benefit immensely from playing a ton in key situations in the CHL. Certainly the value of a goalie practicing everyday against pro shooters and a forward battling with pro defencemen is not to be discounted, but I still think being in a position to be a CHL impact player, with the pressure and responsibility that goes with it, shouldn't be undervalued. 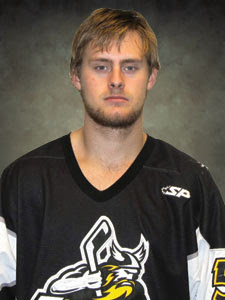 Ryan Martindale was part of one of the top forward trios in the entire CHL last year and his OHL club, the Ottawa 67's, are poised to have another strong season even without him. Ottawa reached the semi-finals in 2010-11 but have returned most of their key players including Martindale's linemates Shane Prince (OTT) and Tyler Toffoli (LA). 2013 eligible prospect Sean Monahan is having a tremendous start to the year and notable 2012 defenceman Cody Ceci is showing why he's worthy of 1st round consideration and received an invite to Canada's U20 camp this past August.

It's pretty tough to imagine that having Martindale on the team wouldn't help bolster the 67's quest to capture the OHL title.

It's equally difficult to suggest that the 6'3 forward is too good for junior hockey. Here's a guy who is coming off a 34 goal, 83-point season but that was his best year by far. There are CIS players with more career junior points so it's not like he's accomplished all he can from the OHL. Martindale does have 4 years under his belt and I'm sure if you asked the player he'd say that he's ready for the next level (where he'll earn a pro pay cheque) but I still wonder if Stockton is the better place for him.

He's managed a single assist, no goals, in 4 ECHL games thus far. The 67's, as if still hopeful of a possible return, still list him as one of their 3 overage players. 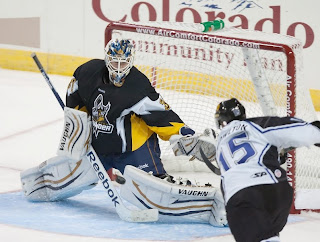 Netminder Olivier Roy has started 3 of Stockton's 4 games this year and has 0-2-1 record with .911 sv% and 2.62 GAA. The Quebec native spent last year with Acadie-Bathurst and his year end numbers were actually quite similar to what he's compiled this far in the ECHL.

Like Martindale, I'm sure Roy is pleased to be getting paid but I'm guessing he was hoping to at least be playing in the AHL this year. If he were still in the Q he'd be considered one of, if not the, top netminders in the league and a huge commodity to be traded for by a contending club like Saint John, Victoriaville or the 2012 Memorial Cup host Shanwinigan Cataractes. Instead of a virtual guarantee of big minutes and playing well into May, Roy will split time in Stockton with San Jose Sharks prospect Thomas Heemskerk who has the team's only win this year. 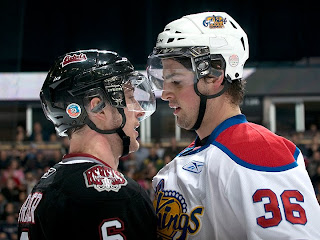 The other player the Oilers have assigned to Stockton is Cameron Abney who played the last couple of seasons in the WHL with the Edmonton Oil Kings. Unlike Martindale and Roy, Abney's value to a junior club this year would be minimal since he's not a point producer and seemed almost reluctant at time to drops the gloves. You can partly blame injury for some of that but others it the know have suggested he chose to intimidate with stare downs more often than his fists.

Abney in the ECHL is no surprise and I'm even not sure there would be a team in the WHL that would have sought to acquire him in trade from the Oil Kings who had no need, or desire, for him to return as an overager this year.

The Oilers are sitting with 48 pro contracts right now. Would it not be the wisest thing for them to free up a couple more by returning Martindale to Ottawa and Roy to the QMJHL where both would play huge minutes? What's the downside to allowing prospects to actually dominate at the junior level before moving up to pro?

What's the rush to turn them pro already? The ECHL isn't going anywhere, Roy can still play there next year once Tyler Bunz turns pro and passes him on the depth chart. Martindale might be able to latch on to a AHL roster spot next season assuming the Oilers walk away from RFA guys like Hunter Tremblay, Milan Kytnar and Gilbert Brule.

Maybe I'm missing something. If you think I am, or even if you agree with me, please feel free to let me know in the comments section below.
Posted by Guy Flaming @ 11:00 PM

1) The Oilers agreement with Stockton this year REQUIRED a certain number of contracted players. They had no choice but to have someone there.

2) It was mentioned in passing, although I can't source this, that the Oilers promised the Thunder a Goaltender for the upcoming season.

Even if they didn't, I think Goaltenders are absolutely fine in the ECHL. Dubnyk spent a season there and it didn't hurt him, nor did it hurt the many Goalies who are currently in the NHL who started their pro careers there.

The Sharks prospect might have the only win, but that was his only start and the it seems the only reason they won is because he got run support that Roy didn't. Roy's stats are solid.

3) I don't think the Oilers have any desire to walk away from Tremblay or Kytnar. Especially the former, whom the organization raves about.

1) If that is the case then they could sign any one of a number of young free agent goalies out there. Lucas Gore comes to mind, now playing CIS. Wisconsin senior Scott Gudmandson is another (not sure if he's been signed yet or not).

2. You're right that the ECHL didn't hurt Dubnyk or anyone else. My suggestion is that Roy and Martindale would be BETTER OFF in the CHL, not that their development is hurt in the ECHL.

Sincerely, thanks for taking the time to comment, I much appreciate the conversation!

i'm curious if you feel that the ECHL is a higher level of competition than the CHL, when it comes to SKILL?

obviously the players are older and bigger/tougher, but are they more skilled as well? in other words, has anyone looked at the draft pedigree of ECHL players, for eg, vs CHL? how many of the best CHL players end up in the ECHL, as opposed to starting in the AHL, or bypassing minor pro completely. it is interesting that abney may not have made a CHL squad (at least as an overager) but he makes the ECHL team.

It would seem to me that any advantage of playing against "tougher" competition in the ECHL would be much less if the "skill" level of ECHL players is less than your typical CHL player.