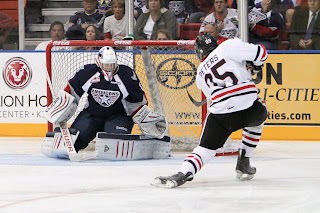 16-year-old Eric Comrie wasn't having the greatest start to his WHL career but it's taken a big turn for the better after he posted back-to-back shutouts against the Prince George Cougars over the last two nights.


Friday the Tri City Americans edged Prince George 1-0 and outshot the Cougars 32-17. You can't tell from a boxscore what the quality of those 17 shots were that he faced but Comrie was credited with the shutout so take that at face value.

I had to do a double take looking at the summaries on Saturday; another 1-0 victory for the visiting Americans but this time Prince George fired 30 pucks at the rookie with the same result.

If that's not a confidence booster for both Comrie and the team playing in front of him, I don't know what is. The Americans have been getting stellar netminding from Ty Rimmer but Comrie is the goalie of the future for the team but was playing behind the vet.

It's an unfortunate outcome for Drew Owsley in the Prince George goal. He was beaten just twice in two games but his club dropped them both as they were unable to score even once. Owsley played the last three seasons with the Americans.