Should the OHL Look at Thunder Bay? 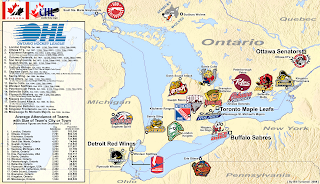 The Ontario Hockey League consists of 17 teams located throughout Ontario, 2 more in Michigan and one other based in Erie Pennsylvania. Like the WHL and QMJHL, the OHL has a remote franchise or two, in this case the Soo Greyhounds who are situated 4.5 hours from their nearest rival in Sudbury. The next stop of the trail is Barrie, another 300 km. past Sudbury so you get a sense of just how far the Greyhounds have to travel during the year.

Listen, the Prince George Cougars, Portland Winterhawks and Brandon Wheat Kings don't have any sympathy for the Greyhounds. I'm sure the same can be said about the QMJHL's teams in Cape Breton, Chicoutimi and Rouyn-Noranda.

We recently received a letter from a fan in Ontario who would love to see the OHL expand to Thunder Bay, a big town that's even further away from the rest of the league than the Soo is. We're talking 700 km. to Sault Ste. Marie, 1000 km. to Sudbury and a staggering 1283 km. to Barrie. And that's just the closest 3 teams!

While we're going to share the letter with you, it's not an idea that I personal believe can work (I can't speak for Dean) but we'd love to hear your thoughts on it.


Time for OHL team in Thunder Bay
by "Dave R." 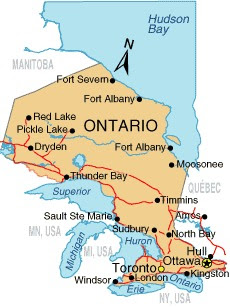 I recently embarked on a trip too northwestern Ontario from my home in St. Catharines, on the way back amid the majestic beauty of fall colors detailing the shores of Lake Superior, I made a point of trying to go to as many small town arenas as possible. The arenas of northwestern Ontario and the photos adorned in the walls are a rolling tribute to some of Canada's hockey aristocrats. It was not until I hit Sault St Marie that I felt the meshing of hockey lore and the business end of the sport. In a waste no space, polished, sparkling new arena nestled in the heart of downtown Soo sits the state of the Art Essar Centre with capacity for 5000 people a perfect size major junior arena.

As I placed my weight with my upper body over the standing room rail to admire my surroundings; the banners, on ice logos, Greyhound offices I could not shake the assertion that it was way past due that Thunder Bay should have an OHL franchise.

It is duly recognized that this is a well worn issue, not just now being unearthed here. 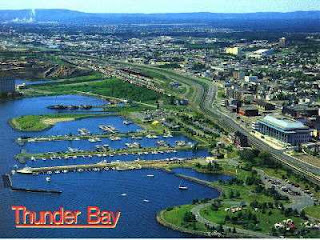 Born and raised in Thunder Bay my birth certificate actually says Fort William attributed to being born a couple years before the amalgamation of the twin cities. I therefore have a bias that a lot of us from the Lakehead share; we can pick each other out in a crowd in Southern Ontario and exchange that Thunder Bay forever moment.

Without treading to thickly into arguments of logic, feasibility and how the machinations of scheduling/travel cost can be dealt with. Lets blue sky a few good reasons an OHL/Lakehead marriage needs to happen and see what sentiments would come to light at first blush. The city has a captive population of approximately 130 thousand. Not to mention
the support of regional towns in northwestern Ontario. It is a city steeped in hockey tradition that currently boasts one of the most successful albeit new CIS hockey franchises. As a rule major junior outdraws CIS hockey across the board
in Canada, if the CIS Thunderwolves are doing well, can one imagine how successful the OHL brand would be.

A staggering list of names could be compiled that the OHL has mined out of this region to fuel and build the elite level brand that exists today.

A quick look at other leagues under the CHL umbrella reveal that the WHL stretches from Portland, Oregon to Brandon, MB, the QMJHL from Cape Breton, NS to Rouyn-Noranda, PQ.

This is big business, the coaches are high profile and paid well, the venues are state of the art, there are TV contracts, etc.; this is not our fathers OHL - it can and should be able touch both ends of the province.

Not only would the people of Thunder Bay support a team but it would be a flagship franchise. Say what you want about the American Hockey League standard of players, it does not have the same capacity to build excitement and for some reason does not seem to generate a buzz in the city that a Major Junior team would.

If investors are a problem, it seems in vogue that NHL players are now buying into Junior franchises, maybe a group of players from Northwestern Ontario that honed there skills in the OHL can form a buying group. There has been talk about an OHL franchise in Thunder Bay for years. The time has come, no more stalling.

Email ThisBlogThis!Share to TwitterShare to FacebookShare to Pinterest
Labels: OHL

I think it's a great idea.

Well written article. I love your passion and enthusiasm. Problem being winter weather. It is hard enough driving to Sault Ste Marie for teams to enjoy our fairly new Essar Centre. But Highway 17 North between Sault Ste Marie and Wawa (and beyond most of the time) is frequently closed. Just this past week it has been closed 3 or 4 times. Not to mention the additional 7-8 hours past Sault Ste Marie. Teams regularly complain about traveling this far. Refs dislike the travel and often have a bias against the team and city because of it.