He was the QMJHL's Rookie of the Year in 2010-11 after nearly being a point per game player, he suited up for Canada as an under-aged forward at the U18s in Germany this past April and led Canada in scoring at the Ivan Hlinka tournament as well. It's odd that few are talking about him yet for the 2012 NHL Entry Draft.

Make no mistake, by the end of the year general hockey fans will not only recognize the name Chalres Hudon but they'll be wanting their favourite NHL team to be calling it out in June.


We had an opportunity this past Tuesday to speak with the offensive dynamo about last season, his summer and to look ahead at the 2011-12 campaign. It didn't take long to get a sense of the excitement Hudon has for his club this year. 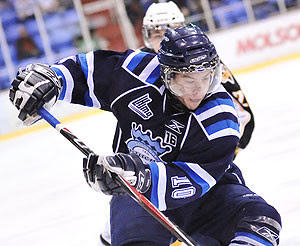 "I think for me it's a good year because it's my draft year so it is important for me to have a good season with the boys and for the team," the native of Alma, PQ summed up in his broken English, "We're a young team in Chicoutimi but we've got the best goalie, Christopher Gibson who was drafted by L.A., and we have Lukas Sedlak, drafted by Columbus, so we have two guys already drafted."

Hudon racked up 23 goals and 60 points in 63 games with the Saguenéens last year, his first in the QMJHL. Perhaps most impressive was his +26 rating on a team that finished 13th in what was an 18-team league. His immediate CHL success has given him a comfort level that he feels will help him this season when the eyes of the NHL scouting community are on him.

"Yes I have a lot of confidence because last year I had a good year and [was named] I was Rookie of the Year and I'm trying to play the same game," he told us, "There are some scouts in the stands but I never mind, I'm more stressed when my family is there than by the scouts."

It was a busy off season for Hudon who went from the QMJHL playoffs to Germany with Canada's U18 team and then right into preparing for the 2011-12 year. That hard work was more enjoyable though as he spent a lot of time with a former QMJHL player that he told us is someone he's trying to emulate. 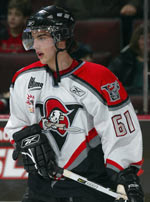 "Derick Brassard... I train with him all through the summer so I took some details of his [training] program on the gym and on the ice," said Hudon, "It's good to train with him because I can show what I can do with older guys. I think I'm the same type of player as I was but that I will shoot the puck more and have more speed this year."

He's also added some size which was a must for a guy who was listed at 5'8 and 165 lbs last year.

"I'm now 5'10 and 175 lbs.," he told us, "With training in Chicoutimi I've been concentrating on my legs and the VO2 test. This year I want to be bigger so it's been good to be in Chicoutimi with a good trainer like I have." 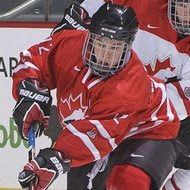 Then in August came the Ivan Hlinka tournament and the tryout in Calgary where the top '94 born players in Canada assembled to try and make the team. Hudon did and went on to win gold and lead Canada in scoring with 9 points, almost twice as many as anyone else on the squad. Obviously he was pleased with his performance in the Czech Republic but it was interesting to hear him explain why he felt he was better there than in Germany in April.

"Yeah it was [satisfied]," he began, "I was there with Mario Duhamel, a French coach, and that was better than when I went to Germany where all the team was English. That was difficult for me because I'm French, I'm Quebecois. I played 4th line and that's not my role; I'm an offensive player. This year with the Ivan Hlinka team the coach, Steve Spott, talked to me just before the camp and said 'you need to show your skills' and he also said 'I want you to be the next Derek Roy'."

And obviously he did. TPS talked to two scouts about Hudon, one before the tournament and one after, and both raved about his abilities.

"He's a smart, playmaking forward... A smaller guy but very quick," said ISS head scout Ross MacLean on our show in late July, "He's the kind of kid that excels in that international style of play."

How prophetic was that statement now using hindsight?

"Steve Spott and the coaching staff felt that going into the tournament, it wasn't going to be about one player," TSN analyst Craig Button said during his appearance on TPS in August, "Charles Hudon, who is an offensive player, was excellent on the power play, he made good plays, handled the puck got good scoring chances and was really able to be a point producer for Canada."

Hudon also felt that he clicked with his linemates, Jarrod Maidens and Brendan Gaunce but especially with a couple of other guys who were also on the U18 team in April.

"I played on the power play with Matt Dumba and Morgan Rielly," said Hudon, "I had already played with Rielly and [Slater] Koekkoek on the Germany team so I think for me at the camp in Calgary that helped me a lot." 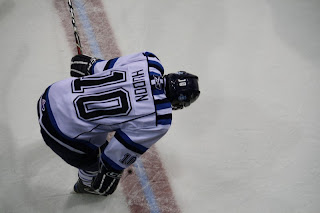 Because it is his NHL draft year, I asked Hudon if he has any specific goals that he wants to accomplish this year that would make the season a success. The young man gave an excellent answer, the type NHL clubs will be happy to hear.

"I think for me it's for the team to be the best team," Hudon said, "If I have 20 points but the team is in first place I would be more happy than if I have 70 points and the team is down in 12th place."

He's off to another quick start this year. Currently 5th in league scoring with 16 points, Dean asked Hudon whether he sees himself more as a scorer or as a play maker.

"I like to do both; I like to shoot a lot, at the start of the season I had 45 shots through 10 games but I love to pass the puck because with my skill and vision I can pass to the other boys on my team," said the 17-year-old, "It's good to [train] with older guys because you learn that you can do some things but then when i went to Calgary and Germany for the tournaments, they know that i can shoot the puck or that I can pass it."

Hudon will have to prove that last year's success wasn't a flash in the pan and that his upside outweighs the perceived negatives that his smallish frame will invoke. Dean offered up a scout's comparison to Jaden Schwartz. Others have suggested NHL veteran Martin St. Louis is an accurate projection. Either way... this is a player worth paying attention to this year.
Posted by Guy Flaming @ 12:00 PM