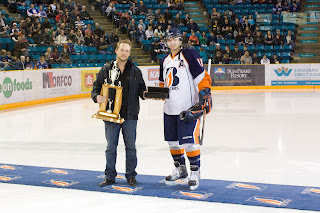 Continuing with Chapter 6 of his guest blogging series with us is Dylan Willick, forward of the Kamloops Blazers. The native of Prince George, B.C. submitted his first entry to the blog back on November 1st with Part 2 arriving at the end of November. Part 3 came early in 2011. On February we were treated to the 4th installment. Chapter 5 hit screens on March 10th.

Since then, Willick's season has come to an end but with the Blazers but some big news came his way in early April.


Since it was so fun doing the blog the first five times, let's go one more round for old time's sake. As exciting as my hockey season was for me, you probably don't want to read up on my less than exciting training routine, so let's talk about some other things... 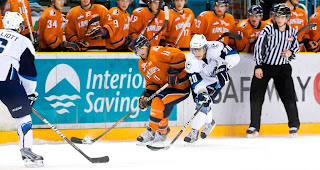 Well, I guess I haven't let the cat out of the bag by telling you my team did not make the playoffs this year. It was a disappointing end to our less than stellar season. Our last two games of the regular season would have decided our fate for playoff contention had we won the first of the two games. The Prince George Cougars beat us in a shootout that game, making our final game of the season, unnecessary. They needed the win to place 7th and play a division rival in the first round. They went on to do just that, beating us 5-1 in my hometown arena, to end our season. This made us end our year with an overall streak of 0-6-0-2. We just were flat and couldn't get it done against our BC Division rivals this year. As a team, we just can't get flat like that at any point in the year, especially that late, and as a result, it left it us out in the cold and no longer in the playoff hunt.

As much as it was a heart breaker at the end of the season, one can't dwell on the past and I choose to look ahead to the future. This summer is a very important one for me as I will be watching the draft hoping to hear my name called by an NHL team. Before that day comes though, I have a couple of weeks to simply unwind from the season and rest up any nagging injuries and have some time to think about how I would like things to go next season. Like all guys who play at this level, I will be starting my off ice training routine pretty soon. I will be working to add on to my 5'10”, 191 lb frame and will most likely be found at the rink catching some summer ice times with the local Prince George talent that I referred to in my first blog. 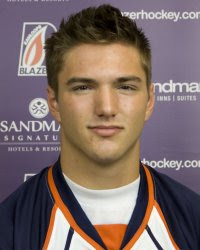 NHL Central Scouting released its final ranking just the other day and I was happy to see two fellow Blazers on the list. D-man Tyler Hansen and forward Colin Smith were showing nicely on the list and to my delight, a little further down on the list, I finally found my name, ranked at 164. This is a very prestigious list of players and it is an honour to just see my name on there for the first time.

Though the team isn't together for the post season, there are a couple teammates who have found a place to play for a little while longer. 20-year-old defenceman Corey Fienhage got called up to the Buffalo Sabres affiliate team for the rest of their season/playoffs. He was a solid d-man on our team and a good guy in the room. I wish him all the best in his future hockey and life paths. Fellow forward Colin Smith was selected to represent Canada at the U-18 championships in Dresden, Germany. He is another player looking to get drafted this year and he has the talent to do so. I wish him and his teammates all the best there. I'm sure they will all do our country proud. 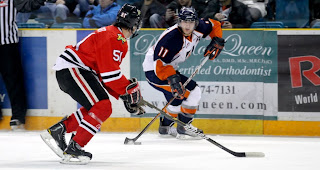 Although I was one shy of my goal of 25 goals, I was rewarded in other ways. I was named Player of the Month of March for our team, and as well, was named the Unsung Hero (photo at top) and shared The Most Dedicated award with Colin Smith at our year end award ceremony. These are awards I am very proud of and am honoured to have received them, as there were many players on our team who fit into these categories.

Since I've been home, I've done a lot of on-ice volunteering for different tryouts going on in our area. I helped at the U16 Zone 8 camp; U17 Zone 6 tryout camps, coaching on the bench and running drills and practices. It is a lot of fun to go back to the camps and see the upcoming talent that the North has to offer. This weekend, I am volunteering with an Atoms team for the YMCA's Hockey Jamboree. I remember getting my first taste of competitive hockey at this age, so it's fun to hang out on the ice with these little guys and reminisce about playing in the Atom Fiesta tournament in Osoyoos, BC with the Quesnel Thunder Atom Selects when I was their age.

Before I say sign off, I would like to take a moment to say 'thank you' to a lot of people who were behind me every step of the way this season. If not for these people, I would not be where I am today. So, I would like to say thank you to my teammates for making the season a great and fun experience. Thank you to the entire Blazers organization, from our wonderful coaches, trainer, management, owners and office staff. Thanks also to CC, our bus driver, who makes the long road trips bearable and he always gets us there safely. 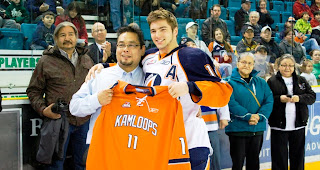 I was fortunate to have two of the greatest billet parents in K-town for the past two years, Dan and Sandi Lyng, so thank you for treating me like family from start to finish. Thanks to the Blazers fans who make our rink fun to play in, and gives us another reason to play our hearts out every night. Thanks to the media guys who had my back all season, and mentioned my name here and there, including our great play by play announcers, Jon Keen and Rick Wile. Thanks to my former coach, Trevor Sprague, who was always willing to give me advice or a kick in the butt if and when I needed it.

Thank you to Guy Flaming, Dean Millard and the entire Pipeline Show crew for allowing me to post, maybe one too many times, on your blog. Special thanks to Jerrold Colton & Greg Simpson of CS Sports Management, for everything this year, you work too hard at times or so it seems...

And of course, a big MERCI to my family for supporting me through everything, not just hockey. A very special thank you to my mom, Melissa, who above all, and through and through, is my biggest fan. She is a great TEAM mom and loves to put the whole team first... especially when they need a box of cookies for the road!! She is probably the biggest reason I am where I am today.

And to you, thanks for reading through the season with me... Au revoir!
Posted by Guy Flaming @ 6:00 AM