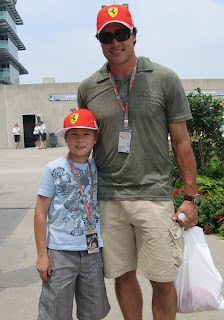 We're seeing more and more kids who grew up in NHL locker rooms suiting up in WHL rinks. Brandon Sutter, Landon Ferraro, David Musil just to name a few, and there seems to be more on the way.

This week Portland announced the signing of Brandon Burke who's father is Sean Burke of 18 NHL seasons fame.

This weekend at the WHL prospect camp in California, there is also an NHL flavour with Eemil Selanne (seen here much younger) and Tyson McLellan who's fathers are the Finnish Flash Teemu and San Jose Shark head coach Todd. McLellan is a no brainer for me as he Todd was very successful behind the bench in Swift Current, but I just assumed that Selanne would head back to Finland when his career wrapped up. But who knows the way he's going maybe him and his son will play together some day in the NHL like Gordie Howe and his kids.
Posted by Dean Millard @ 1:27 AM