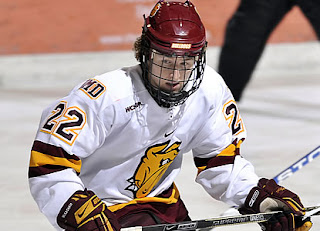 San Jose appears to have done it again. One of the more aggressive franchises in the NHL when it comes to signing collegiate free agents, the Sharks are reportedly circling Minnesota Duluth star forward Mike Connolly. USCHO.com spoke with both Connolly and UMD head coach Scott Sandelin and Kevin Pates is reporting contract details on Twitter.


Connolly is a 5'9, 190 lb native of Calgary, AB who just helped Duluth capture their first ever national championship last week at the Frozen Four in St. Paul, Minnesota. The Bulldog forward, who fits that team moniker to a tee, had a career high 28 goals and 54 points as a junior in 42 games. He scored a key goal against Notre Dame in the semi-final and led all players with 9 shots on goal in the final against Michigan. 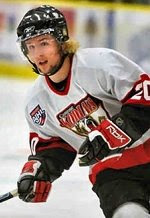 Covering the event in person, Connolly was one of the players I was focused on during my time down thee. He's the player I'd see play the most beginning five or six years earlier when he was a member of the AJHL's Camrose Kodiaks. When I spoke to him in Minnesota he reflected back on his time with the Kodiaks and the back-to-back RBC Cup losses. He made it clear that his mission at Duluth was to win a national championship for the University program but also to erase the memories of the RBC Cup failures.

In his draft year he broke his leg and missed half of the seasons. I interviewed him that year and he agreed that while it might mean getting passed over at the draft, being a free agent might be even better for him in the long run.

I always followed along with Connolly's career with a lot of interest. He attended Edmonton's prospect camp last summer and put in a solid showing there. 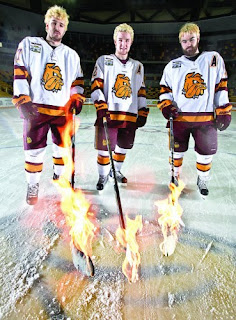 At the Frozen Four his line was dominant even though not as productive as they had been all season long. Connolly (in the middle), Justin Fontaine (left) and Jack Connolly (no relation) were one of the most potent trios in college hockey this past season, all three finished in the top 7 of NCAA scoring. Their control and chemistry on a power play is something to see; always moving, crisp passes and plenty of shots on net.

Watching Connolly he reminded me very much of Jordan Eberle, especially since the latter has filled out more from his WHL days. Neither are big but they don't shy away from tough areas on the ice and they both shoot a ton. They both make their living within 15 feet of the net and they both score huge goals at key times. I tweeted it at the time, "Connolly is to UMD what Eberle is to the Oilers" and a minute later Regina Pats President Brent Parker reminded me that the two played together in Midget hockey making the connection even stronger. 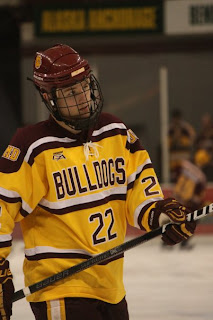 As a junior, Connolly had the ability to return to UMD for a senior year but I got the sense from him and from teammates that it wasn't likely, especially after winning the national title.