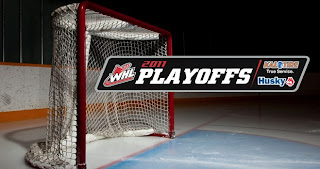 Spokane booked it's ticket to round 2 and a date with Tri City after a 6-4 win over Chilliwack, winning the series 4-1. Blake Gal lit it up with a hatty including the game winner, Mitch Holmberg scored twice and Levko Koper had 3 points and was +4. A scout I spoke to Friday night told me he thinks the Chiefs are the best junior team - meaning they have the best junior players, not just the best NHL prospects - and we asked Chiefs voice Mike Boyle Saturday morning about that. He told us this year's version reminds him of the '08 Memorial Cup championship team.


I can't imagine what it was like to be a Chilliwack Bruin fan in the playoffs. Every day there were new details about the team moving to Victoria. It reminded me in a minor way of what it was like in Winnipeg in 1996 when the Jets were flying out of town. That year NIkolai Khabibulin gave Winnipeg a chance to compete against a power house Detroit team, kind of like what undrafted Lucas Gore did for the Bruins against Spokane. Gore faced 247 shots in 5 games, won one of them and faced 63 i the opener. No wonder he had two plays in the top 10 WHL plays of the year. I hope, despite his slight figure that a team out there gives him a chance at an NHL training camp.

There was a lot of talk at Rexall Place Thursday night after the Oil Kings were eliminated by the Red Deer Rebels, that Red Deer could be facing Prince Albert in round 2. The Raiders had just evened things up with the top team in the WHL and some thought the Blades were ripe for the upset. Well, they certainly answered those questions Saturday night on home ice. The Blades came out firing putting up 17 shots in the first, but were held off the scoresheet. The second was a different story with 22 shots..and 6 goals. Oilers 2010 second rounder Curtis Hamilton had 2 goals and an assist, Kings 09 first rounder Brayden Schenn set up 3 goals and Duncan Siemens, who will likely be the first WHL defenceman drafted this June, had a goal, 3 assists and was +2. Saskatoon takes a 3-2 series lead with game 6 tonight in Prince Albert.

It was another high scoring shoot out between Brandon and Medicine Hat with the Tigers winning 9-5 on home ice. But it shouldn't be that shocking as both teams are without their starting goaltenders, in fact Brandon only dressed one tonight. Linden Vey and Emerson Etem scored 1:41 apart in the second period, part of 4 unanswered goals that created a lead the Brandon couldn't catch. Vey a Kings 4th rounder from 2009 who led the WHL in scoring this season lit the lamp once and set up 2 more while Ducks 2010 first round Etem scored twice and assisted once. Medicine Hat takes a 3-2 series lead, their first so far with game 5 going at the MTS Centre in Winnipeg Monday night.
Posted by Dean Millard @ 6:00 AM